What Next After School 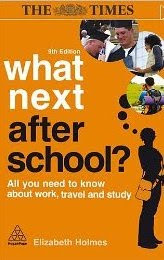 'What Next After School?' is a very appropriate question as I've two children who have done their GCSEs this year. It's also the title of a book with a hot new edition on the shelves from Kogan Page, the nice people who publish my business bestseller Instant Creativity and who kindly sent me a copy to peruse.

This is a real compendium of guidance for those who are leaving school. I liked the way it didn't talk down to its readers and attempt yoof speak, or too much trendiness - instead it's extremely solid and practical.

There's good stuff in here about career planning, getting it right with interviews and application forms, opportunities for further education, gap years and working abroad. I liked the way it gave a good, round picture of what's needed - for instance was very helpful to have a section on dealing with your money (perhaps there should have been a dealing with your laundry/cooking sections too). The final chunk is a 'spotlight on key professions' - I found this least satisfactory, as it's a rather arbitrary set of jobs that doesn't really reflect the range available these days.

Overall, then, these chunky 341 pages (formatted rather like a slightly oversized rough guide) has an awful lot of content, much of it extremely useful. I do have a couple of issues, though. The book is scattered with full page colour adverts, which I found much more intrusive and in-your-face than the equivalent in a magazine, I think because of the page size and proximity to the text - I really didn't like these.

The other problem I have is how many young people would bother to read it. I know my 16-year-olds aren't the target audience really, as they're just heading off to sixth form, but I can't imagine either of them reading this book. The text is very dense and sometimes quite heavy going. Although I was pleased it isn't dumbed down, I think it could be thinned out and given better page layout (there's relatively little white space), and perhaps some graphics, to make it more approachable.

I also felt that it was structured as a book to read through, where the topic might have been better served with a more segmented, dip in, dip out format.

Because of this, I wonder if the target market is more parents than the young people themselves. Despite this consideration, though, I think it is a very useful and informative book. Young people might not be inclined to buy it for themselves, but I would give serious consideration to buying it for them as a useful addition to their future planning kitbag. You can find it at Amazon.co.uk and Amazon.com