Nikola who? The remarkable Mr Tesla 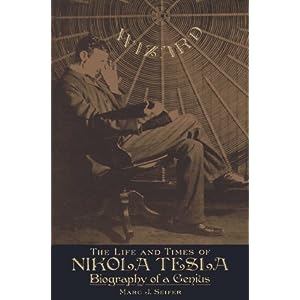 In the last few months I've read not one, but two biographies of the remarkable early late 19th/early 20th century engineer Nikola Tesla: Tesla: Man Out of Time by Margaret Cheney and Wizard by Mark J. Seifer. Although there is no doubt about some of his achievements, Tesla has a reputation of being a man of mystery, and has been taken up by New Agers for his dramatic claims to be able to broadcast power around the world, produce beam weapons and contact aliens.

I hoped that these biographies would help me separate the wheat from the chaff in Tesla's attainments, but in both cases I had to apply a lot of selection to what I read, because the authors both seem to hero-worship Tesla and take as gospel most of his scientific ideas that might politely be described as unlikely (or accurately as downright weird).

If you haven't heard of Tesla, be assured he wasn't just a crackpot. One of the SI units is named after him - and for a good reason. He was a superb engineer and he single-handedly designed the AC system that we use today, including inventing the first serious AC motors, and the basis for practically every AC motor since. He also invented the fluorescent light (though never commercially developed it, as he had already moved onto his next excitement).

However, and it's a big however, Tesla was also an over-the-top showman, who delighted in showing off by lighting up fancy bulbs with electricity that had been passed through his body - and, on the whole, he was nowhere near as good a scientist as an engineer.

Specifically, he rejected both relativity and quantum theory for decades after they were widely accepted in the scientific community, and he had a strange hangup about radio. He believed that the 'Hertzian waves' used by the likes of Marconi were a piffling use of electromagnetism for communication, and that instead it was possible to use 'Tesla waves' - mysterious longitudinal waves (compression waves like sound) he believed also exhibited by electromagnetism, and which he believed could be pumped through the Earth, using the Earth's resonant frequency is such a way that amplitude grew with distance rather than falling off. With a big enough tower and enough voltage he believed he could communicate to the whole world at once - or distribute power wirelessly through the same mechanism.

He was also given to lavish over-exaggeration of his inventions. So, for instance, he developed the first radio controlled boat - an excellent invention. But he claimed that this would soon be extended to be able to act on its own, thinking for itself. He did not distinguish between remote control and AI-driven robots - a bizarre exaggeration.

Of the two biographies I would strongly recommend going for Wizard, which has much more interesting detail of historical context. However it still needs to be read carefully as Seifer frequently shows that he doesn't understand the science Tesla was using (or claimed to be using). So, for example, Seifer refers to 25,000 volts being '[stepped] down to usable frequencies when they reached the exposition', clearly confusing voltage and frequency. He tells us that 'Electricity in its natural state is alternating,' whatever that means. He tells us that John Herschel discovered Uranus (it was actually his father, William). Most remarkably, we hear that Tesla was capable of something that would shock modern physicists: 'Tesla also appears to have come close to the idea of breaking up the electron into subatomic particles.' It's hard to know where to begin on how wrong that statement is.

Tesla was a fascinating, wonderful, wild character. But we need to distinguish his very real engineering genius from his scientific flights of fancy. I'll leave you with a bit of movie with David Bowie playing Tesla in The Prestige. Note that the effect of the start echoes a real photograph of Tesla - but Tesla admitted it was a multiple exposure; if he had really been in the electrical 'storm' he would have been killed: