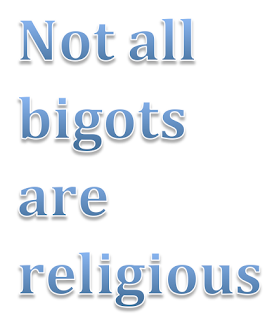 The recent furore (well, furore in teacup) over Free Schools teaching creationism has made me quite angry. We have seen the creationist/intelligent design lobby in the US over the years use all sorts of dirty tricks to try to sneak creationist pseudo-science onto the agenda. But now those opposing religion, specifically the British Humanist Association, but also plenty of others who should know better, are resorting to their own dirty tricks, and it's not good enough.

If you want to make your point by using good reasoned argument, you mustn't cheat or you will be ignored when the truth comes out.

The problem I have is this. There is every good reason to oppose creationism, which in its most extreme ('young Earth') form says God made the Earth, essentially as it is now, 6,000 years ago, and in its watered down ('old Earth') form says God made the Earth as it says in Genesis in the Bible, but over a longer timescale. Creationism is biblical literalism.

However the majority of believing Christians (and basically this is an attack on Christianity, let's not pretend otherwise) in the UK are neither creationists nor literalists. They believe in a creator God but believe that said God used the mechanisms that science thinks are responsible for things being the way they are, whether it's quantum theory and the standard model or evolution.

All this sound and fury is because certain factions are conflating creationism and a Christian belief in God, which are simply not the same thing. I don't think they are doing this accidentally - this appears to be a deliberate attempt to mislead. They are trying to make 'creationism' just another word for 'Christian' and I object, if only as a writer to this misuse. It would be ridiculous to say that, for instance, a CofE school in its assemblies or RE lessons could not teach about a creator God - that's thought police territory. Such a school shouldn't be able to teach creationism as science - and they aren't allowed to - but the two things are totally separate.

Of course there is a different issue of whether we ought to allow religious schools at all - I don't think we should - but that debate is quite different from this one. While they exist they have the right to do what the law says they can do.

I'm afraid I really do blame Richard Dawkins and his cohorts of muscular atheists who never seem to let their bad effect on the general public's opinion of science get in the way of really irritating people. This is anti-religious bigotry pure and simple.