In which we go bonkers in the Languedoc 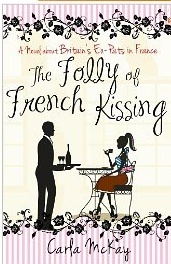 I quite often get asked if I'd like a book for review. If it's not self published and it's a science book, it's usually an easy yes. With fiction, it's very much a matter of whether or not it tickles my fancy - hence the review a while ago of Miss Peregrine's Home for Peculiar Children. So when I received the offer of Carla McKay's The Folly of French Kissing, not an obvious choice of reading for me, I at least weighed up the pros and cons.

On the plus side it was set it France, which I love, and the puff comments ('The Gallic equivalent of something out of Midsomer Murders...') caught my eye. I like a touch of murder if it's British in feel, and this was an ex-pat novel. On the downside it really wasn't the kind of book I usually read (and the cover, according to the chick-lit convention, seems to suggest it's aimed at women).

Now the publisher did themselves no favours sending me a bound proof to review. I hate reading from bound proofs - they don't look and feel right (this one had a blank white cover), and there's always something irritatingly wrong with the text - in this case a whole repeated page (which I hope didn't make it to the printed version). But I persevered and on the whole I'm glad I did. It's a novel of three parts.

At the beginning, when we're being introduced to the ex-pats we'll find in an obscure part of the Languedoc, and how they got there, it's a bit slow. I also was beginning to worry this was a self-published book, as there were a few writing issues that needed some stern editing (more than the requisite zero adverbs, for example). But once we got into the main middle section the style picked up a little and the plot got some pace. Before long I was tearing through it, wanting to find what happened next. For older readers I could best describe it as a girlie version of Leslie Thomas - a lighter touch, but a similar feel in many respects. Like Thomas there was a slight tendency to 2D secondary characters - there was a bluff northerner who was straight out of central casting - but the main characters were quite well drawn.

Then came the final section where the strings were drawn together. I found this a little disappointing as it seemed rushed and a little calculating.

Altogether it was interesting to dive beneath a chick-lit cover, something I would never normally do. The Midsomer Murders hint was entirely misleading - there is crime in it, but not in the way that would give you to expect - but on the whole I enjoyed the experience of The Folly of French Kissing. Ideal for a hot weather, lightweight summer read. See at Amazon.co.uk and Amazon.com
Using these links earns us commission at no cost to you