It's got to be brown 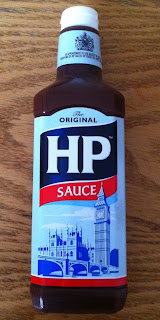 A while ago I eulogised on the subject of barbecue sauce. I admit I am practically an addict - yet I ought also to recognise an older allegiance that is still there. Because I am also very fond of brown sauce.

This is something that could only be invented (or at least named) in the UK. In France it would be (and is) sauce picante. In the US it would be super-tangy fruitified meat sauce or something. But here it's brown sauce. Brown. Plodding. Tells you nothing but the colour, nothing of the delights that lie within.

For me there is nothing better (sorry barbecue, but you don't cut the mustard) to go with, say, a sausage or a pie. I confess (though this is a personal oddity) I have it with fish and chips. But the ultimate has to be as an accompaniment to a cooked breakfast or a bacon sandwich. Those who go for ketchup in these circumstances totally miss the plot.

So essential is it to have this accompaniment that even those bastions of US imperialism McDonalds and Starbucks provide brown sauce with their breakfast rolls, wraps and paninis.

Rather like cola, while there are many clones and copies there are only two serious contenders for the brown sauce crown. I have to dismiss immediately Worcester(shire) sauce. This is a great cooking ingredient but it totally fails as an accompaniment to breakfast. When I lived with my parents we were a Daddies sauce family, but my grandparents went with HP sauce. I'd say Daddies is the Pepsi of brown sauces to HP's Coca Cola. HP is the original, the leader of the pack, and is more subtle than Daddies - a little less fruity, a bit more spicy. When I was a child I had my parents' brown sauce. When I became a man I put aside childish things and converted to HP. After all, how British can a sauce be? It's Houses of Parliament sauce, for goodness sake.

So, if you've never tried it, put off by the name and the look of it - be brave. If used correctly it is nectar of the gods.