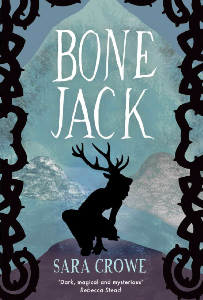 I have been a huge fan of British fantasy writer Alan Garner since I was 11. I went to the same school as Garner, and all the locations of his earlier books were extremely familiar to me - which made the books extra special because a sense of place is central to Garner's superb fantasies. I stayed with him until what was, for me, his best book The Owl Service, after which we parted company as Garner's writing headed into a more confused place.

Since reading Garner I have come to enjoy other fantasy writers - notably Gene Wolfe and Neil Gaiman - whose real world fantasies are far better than pure sword and sorcery because their locations, myth and legend, whether existent or conjured up for the book, intertwine with the lives of ordinary people in a world we know and understand, making the stories much more powerful.

What Sara Crowe has done with Bone Jack is remarkable - she has brought back the intensity of reading Garner. While entirely its own book, and not a pastiche, I felt that same sense of real connection with the landscape, and the dread of the kind of dark fantasy that teenagers understand but adults tend to forget. This is pitched pretty much at the same level as Garner's Elidor - more sophisticated and knowing than his Alderly Edge books, but without the adult connotations of The Owl Service.

It would be an understatement to say I loved it - it was my teen reading recaptured. There isn't an awful lot of 'young adult' fiction I enjoy. I'm generally happy to leave it to its target audience. But Bone Jack hit me fair and square between the eyes.

If I am going to be really picky, I thought Ash's father's problems felt a little engineered to isolate the main character, rather than working as a true part of the plot. I also felt Bone Jack was underused. But those are tiny writers' points that really don't signify much at all.

If you, or a teen you know, likes the kind of fantasy that is tied up with dark legends, blood and the land - but not so dark that the main character can't win through - then you are going to love this book. Run, don't walk to Amazon.co.uk and click up a storm. (It isn't on Amazon.com for technical reasons, but you can still order it in the US from here.)
Using these links earns us commission at no cost to you
books fantasy review reviews young adult