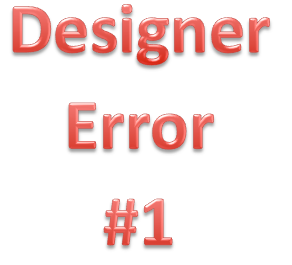 I've always been fascinated by user interface design - the design of the way a person interacts with a product. It tends to be thought of as a computer software thing, but it applies to anything a person interacts with: a car, a fridge... even a door. And as soon as you design a user interface, you are open to designer error. When people try to use your product and get it wrong, the natural inclination is to think that they are idiots. But, in fact, I think of this as Designer Error #1, which is simply defined:


If someone uses your product incorrectly, it is your mistake, not theirs.

I suffered from Designer Error #1 myself on one of my websites recently. But before getting to that, one or two of you may have a nagging doubt. Surely Designer Error #1 can't apply to a door? Does it make sense to talk about user interface design of a door? It certainly does. For quite a while, designers loved producing minimalist glass doors with no obvious hinge or handle. Often these were set in a large swathe of glass. And it would be discovered after their installation that no one could find the door. And when they did, they didn't know which side to open it. Often the post design fix was to resort to signage - but it would have been so much simpler if they had made the hinges visible or put a push plate on the door.

Another example of Designer Error #1 with doors was when British Airways built its swish new headquarters, Waterside. I spent an enjoyable half hour once watching this error in operation on the toilets there. The door into the toilets had a nice clear pull handle on it - a large vertical tubular bar type handle. And person after person would come up to the door and pull the handle. And nothing happened. Because you had to push the door to open it. The designer, it seems, loved symmetry (as they often do), and because there was a pull handle on the inside, put one on the outside too. Fail.

My Designer Error #1 came on my website www.hymncds.com which sells CDs and downloads of accompaniments to hymns. Most of the purchase are straightforward - you either buy CDs or you click through to download from the likes of iTunes and Amazon. But there is an option to order a bespoke CD - one where you choose the tracks from the circa 2,000 strong library and the CD is made to order. Because of the way the pricing works, there are two items required to buy a bespoke CD - a flat production/shipping cost, and a variable amount for the tracks, depending on how many you want. The website made this very clear with a label immediately above the purchasing buttons saying:

However, two purchasers within 24 hours simply paid for the tracks and didn't buy the CD itself, which then required an apologetic email asking for more money and general messing about.

The natural inclination is to think 'Can't they read?! It was obvious, in big letters!' But that's Designer Error #1. It was my fault. The ideal fix would have been to make it only possible to buy one with the other, but that isn't an option with the software I have. So instead I've made two changes. Rather than just have the instruction, then a string of purchase buttons, I have merged the two into a kind of action list: 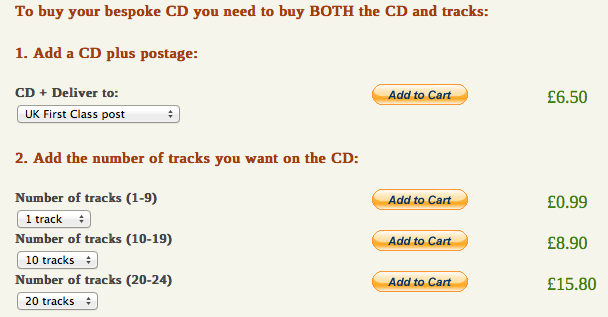 And then, if you do just add the tracks to your cart, you get a reminder there as well: 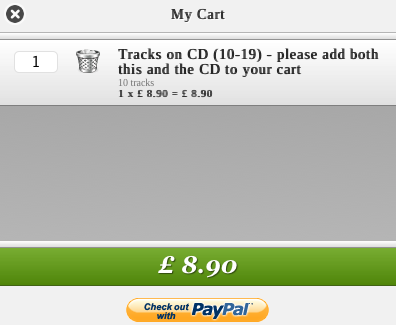 It's not perfect, but it's a heck of a sight better. If buyers still get it wrong, they are clearly silly. But it would still be Designer Error #1, and I would have to go back to the virtual drawing board.
design design errors ease of use user interface