Who wrote the book? 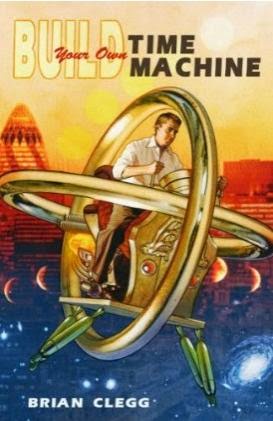 As, for obscure reasons, I am replacing Roy Hattersley at the Kempsford Literary Festival and talking about Build Your Own Time Machine (if you're interested it's in St Mary's Church, Kempsford, 4.30pm on Sunday 27 April, £5 - tickets from kemplitfest@gmail.com or on 01285 810588, or on the door), I thought I'd do a quick time travel related post here.

As I describe in the book/talk, there is nothing in the laws of physics that prevents time travel, and relativity makes forwards time travel relativity simple. Backwards is a lot more tricky, but in principle this is possible using general relativity effects. But many physicists believe that it can never actually happen, in part because of the paradoxes that arise if you can travel into the past.

The best known time paradox is the so-called grandfather paradox, where you visit the past, kill a grandparent before you are born (I don't know why it's a grandparent, but it's traditional) and you're in a bit of a pickle. (Think about it.) But I prefer a rather more elegant and less bloody paradox.

Let's say I sent a copy of Build Your Time Machine back through a time machine to before I started to write it. Then, rather than bother to write the book, I just copy it out and send it off to my publishers. Who wrote the book, and when? The 'me' in the past didn't - he just copied out an existing book. And the 'me' in the future didn't - he just took a book of the shelf and put it into the time machine. Somehow, the book has sprung into existence from nowhere, fully formed.

Although many see this kind of thing as the death knell for backward time travel, others suggest that either it simply wouldn't happen - somehow nature would conspire to avoid my ever getting the book to myself in the past - or even that this is perfectly reasonable and explicable thanks to the the many worlds interpretation of quantum theory. In 'many worlds' every time there is a quantum event that could have more than one outcome, all possible outcomes occur in different universes, making the 'reality' we experience merely one path through a near-infinite tree of universes.

If such an interpretation is true (there is, as yet, no good evidence either way), then it is possible to get around time paradoxes by assuming that the 'original' and 'post time travel' versions involve crossing between different many worlds universes. So I still wrote the book - but it is a different me in a different universe who did so, and the 'me' in this universe really does get a book without any effort.