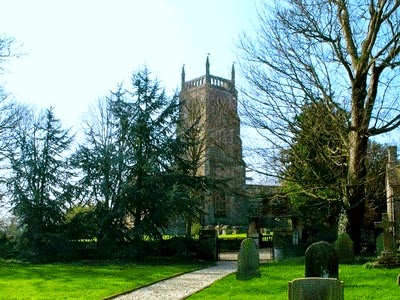 I have had my fingers burned in the past by taking part in a small literary festival. The Brympton Festival, near Yeovil, involved a lovely location, but was a disaster because hardly anyone turned up, and the festival organisers were unable to pay the promised expenses. But when they work well, the small literary festival can be a delight - and never more so than last weekend with the Kempsford festival, just a few miles from where I live, which I attended both as a speaker and audience member.

Arguably it was thanks to Roy Hattersley, who sadly was unable to speak due to illness - but this left a last minute slot to fill, which saw me giving my time machine talk. The festival ran for three days and featured a fascinating range of speakers from Barry Norman to Douglas Hurd. We had everything from a Countess turned historical novelist to an MP who is an expert on the Tudors.

There are several reasons this festival worked so well. The venue was unusual, to say the least - a large village church with unusually comfortable seating and stunning architecture. The organisers combined enthusiasm and professionalism - the whole ran smoother than any festival I've ever attended, including the big ones. And the range of speakers was top quality, but compact enough that I could happily have attended every session on all three days.

As it was, apart from my own talk I only made it for Barry Norman and Chris Skidmore (on the battle of Bosworth). Norman was someone I've grown up with on TV, and who has certainly fostered my love of film, so it was great to hear him speaking in person - and he proved to be a wonderful raconteur, ably assisted by Tim, the festival's MC, who ran the session as a Q&A. Skidmore made me realise just how ignorant I am of British history, and gave a chilling description of the death of Richard III as part of his explanation of how the Tudors came to power.

However, next time around, I will certainly be attending far more of the talks, if this year's line-up is anything to go by. I just love the eclectic mix of topic and the genuine crossover of education and entertainment. When you think that I could have been watching Britain's Got Talent if I hadn't attended the festival, there was no contest - far more of us should be going to events like this, rather than sitting slumped on the TV. And I haven't even mentioned the cakes and wine. I do wonder if the term 'literary festival' puts some people off because it sounds too highbrow and unapproachable - where instead this was thought provoking, warm and fun.

You can find out more about the festival at its website. If you live anywhere around the confluence of Wiltshire, Gloucestershire and Oxfordshire (yes, I know, counties don't flow, but you know what I mean) it makes Kempsford well worth visiting, I'd recommend keeping an eye out for future events. I think the next one is due in 2016.