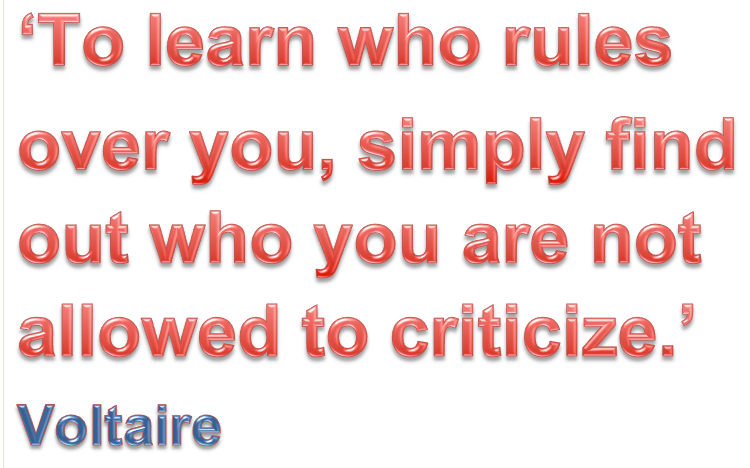 Yesterday, a couple of people on Facebook shared this Voltaire quote with me, illustrated by an image of the masses being crushed by a rich hand. (You could tell it was rich, because it had a fancy bejewelled ring.) It struck me this was a much more interesting concept than was probably intended, because it may well tell us a lot about how things have get better, at least in some parts of the world.

The fact is, in the West at least, we are doing pretty well on this measure, to the extent that you begin to wonder if anyone does rule over us by this definition (is that democracy?).

Specifically there is no possibility that we aren't allowed to criticize politicians or bankers or rich businesspeople (if you doubt this, watch an episode of Have I Got News for You). We don't just do it, we do it for entertainment. We are also allowed to criticize religion as we never were before, which is just as well when you look at the amount of negative stories in the news with a religious context. (A lot of people are scared of criticizing one particular religion because of fear of irrational backlash, but that is very different from not being allowed to criticize.)

There was a time when we weren't allowed to criticize the establishment - but that goes back to before the 1950s, and as the recent kerfuffle over the Butler-Schloss appointment shows, there are now no forbidden targets there.

So who aren't we allowed to criticize? Perhaps anyone the media considers to be a 'saint', though even there, thanks to Jimmy Savile, we are beginning to realize that media sainthood isn't all it's cracked up to be. I could joke about people from Liverpool, or Welsh rugby players and male voice choirs - but that's just as case of people not liking their pride being dented, not a situation where we aren't allowed to make a criticism.

You might say that the draconian libel laws mean we aren't allowed to criticize anyone with lots of money, but even that's not really true. We are allowed to do so, but we need to make sure our allegations are backed up by evidence. And surely that's not a bad thing? Of course there will be specific cases like Simon Singh's appalling treatment by the BCA where a bad decision means unnecessary suffering, but that has led to a change in the law - and he did win in the end.

So, just for once, perhaps we should give ourselves a pat on the back and stop being so negative. Well done, us.
criticism elite fear philosophy politics rulers