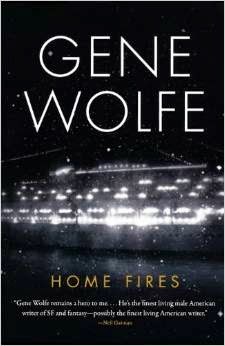 Gene Wolfe is possibly my favourite fiction author, full stop. So coming across a book by him I haven't read, in this case Home Fires from 2010, is something of a red letter day. I think it's fair to say that this novel is a minor addition to his works, but welcome nonetheless, with many of the trademark Wolfe characteristics.

Arguably there are three different types of Wolfe books. There are his collections of short stories, which can be beautiful and frustrating in equal measure. There are his best-known books, the New Sun series, which to be honest I've never particularly enjoyed, though I know many people love them. And there are his real world (i.e. set in ordinary America) fantasy books, which are the ones I can't get enough of. Books like There Are Doors, Castleview and The Sorcerer's House. This title, Home Fires is a bit of an oddity as it fits into the final category, but it's not fantasy. (There is another book, Pandora by Holly Hollander that I'd say is also like this, probably Wolfe's most easily approachable title and a little gem.)

Where Pandora is a mystery story, this is science fiction. Set in a future where there is hardly any oil, most of the action takes place on huge, sail-powered liner. There are significant science fiction themes - the main character and his 'contracta' (roughly member of a civil partnership) have been separated for 20ish years in his time, but only 2 in hers, as she has been fighting in space. There's also a touch of Dollhouse in one aspect of the plot.

I'm not going to give anything more away, but there's enough complexity to keep the intrigue going - it just feels a little lightweight to me. As I mentioned upfront, there are still the trademark characteristics. The reader has little idea what is going on for a fair part of the book. Chapters sometimes end with something totally unexpected. The characters are multi-layered and rarely transparent. It's a bit like a book equivalent of Twin Peaks without the weird bits.

So do I recommend it? To a Wolfe fan, absolutely. And I will certainly read it again, because if there's one thing certain about a Gene Wolfe book, you don't get it all in the first reading. But if you are new to his work, I would suggest having a go at one of the other titles mentioned above first.

You can find Home Fires on Amazon.co.uk and Amazon.com.
Using these links earns us commission at no cost to you