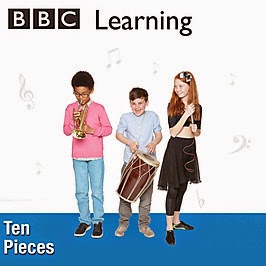 If you have children in primary school in the UK you may find them exposed to something called Ten Pieces at the moment. It's a BBC initiative to promote ten pieces of music to 'open up the world of classical music to primary age children.' What's good about this is that any school (or parent) can download the pieces free of charge (or stream them) here.

I've got really mixed feelings about this. Is it a good idea to introduce primary children to serious music (perhaps a better label than classical, as most of these aren't strictly classical)? Absolutely. Can you specify ten pieces that will do the trick? I'm not sure. I think there's a danger of the same sort of problems they have in English when everyone reads the same set texts.

What definitely is not good is the way I heard one of these pieces played on the radio (for some reason on Radio 2). The piece they happened to be playing is Zadok the Priest, and the presenter seemed to assumed that the opening orchestral section was just filler, so talked over it until just before the singing came in. This was musically inept as the most interesting musical aspect of Zadok is the way that the introduction seems to crescendo, then pulls back, so the real crescendo is vastly more engaging. This was totally missed.

But that was just one silly presenter. What about the list itself? I'd say 5 or 6 of them should be there, but there are some sad omissions. And that, of course, is the problem with every such list. Everyone will different ideas of what should be on it (I just know that at least four of these shouldn't.) The list is:

I wouldn't include the Adams, not because I've anything against film music, but simply because there's far better film music - this is pretty tedious. Can't really argue with Beethoven, though I can't see any point in including the Britten. Grieg - fine. I wouldn't include Handel, because there should have been some Bach and there's no need for both. Holst, certainly. Meredith - sorry, no justification, this is just blatant tokenism. There is much better contemporary serious music. Mozart - I'm not a fan, but I can see he might deserve a place. And you can't question the final two.

What do I think's missing? Apart from Bach, I would have included Vaughan Williams (probably the Tallis fantasia), I would have put in something Tudorbethan - probably a spot of Byrd - and I would have included a bit of opera with singing in - probably Dido's lament from Dido and Aeneas. For a contemporary piece (and I'm conscious I might have gone over 10, so let's drop Mozart), I'd use Whitacre's Cloudburst, especially as that gives us another choral piece.

Still, bearing in mind it truly is a 'no one could agree' thing, the list is not a bad effort, BBC. Pat on the back deserved.