April 27, 2015
On Saturday I had a great time up at Grauniad Towers, curating a Science Communication Masterclass. (Sorry, I hate that 'curating' word in this context, but it's what the G people call it.)

Marcus Chown, Angela Saini, Jenny Rohn and I covered science for magazines and newspapers, TV and radio, books and blogs with a really responsive and interesting audience of 50+ people.

It was a full day event, so it would be over the top even to give a summary, but a few snippety takeaways:

Just a quick explanation of my two lessons. During my talk, the slides kept backing up of their own accord. I first thought that I was accidentally pressing a button on the 'clicker' but it kept happening even when I put it down. What I discovered afterwards was that the presenter's desk had a slide-in shelf with the keyboard and mouse on it. The mouse was trapped between the shelf and the desktop, so every time I brushed against the shelf it pressed a button on the mouse. Spooky! 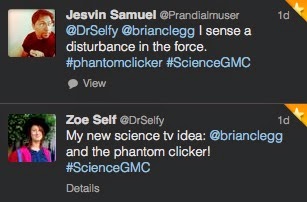 The duvet bit caused much amusement, but I genuinely was given this advice by a professional broadcaster/recordist. If you want a studio ambiance in your home, going under a duvet produces a suitable 'flat' soundscape. It does really work, though you feel a bit of a twit. 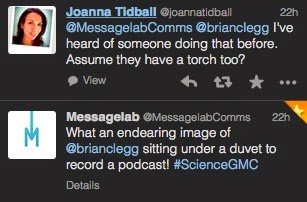 And no, I don't use a torch, I read my script from an iPad*.

*Other glow in the dark tablets are available.