Doorways in the Sand - Review 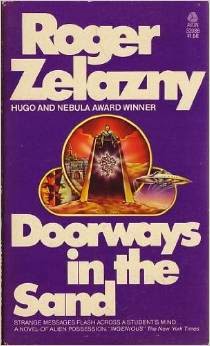 Every now and then I take a break from reading science books and unwind with a spot of fiction. This is often something new, but I also like to dip back into old favourites... and was so glad that I did with Roger Zelazny's Doorways in the Sand, which I haven't read for about 20 years, but was a delight to return to because it remains totally brilliant.

I was a huge fan of Zelazny's Amber series in my teens (I used to haunt the SF bookshop near Piccadilly Station in Manchester, as it sold US imports, and had the latest addition to the Amber books long before they were published in the UK), and still enjoy them, despite the output getting a bit strained towards the end. Doorways, though, is SF rather than fantasy, with that same type of wisecracking hero who would have been portrayed by a young Harrison Ford in the movies.

For the first few pages this could be a 1920s comedy, with a night climber at university who has a trust fund that pays him until he graduates - so every time he comes close to graduating, he changes to a different course, never quite accumulating enough points to graduate, despite the university's determined attempts to see him pass, leading to a comic encounter with the latest in a series of student advisors.

However, there are strange things afoot. Fred, our main character, seems to be receiving garbled messages from the universe, while chapter endings result in sudden, often quite baffling shifts of situation. You have to be prepared to go with the flow and enjoy the scintillating words that Zelazny throws at you and eventually all will become clear (if not straightforward). The book is a total delight, and I don't know anyone currently writing in SF who can achieve this kind of masterful mind play mixing science fiction, humour and adventure. (If there is, please let me know.)

If you've never read it, you really must. Come one - there's a talking wombat. Need I say more?

Still available from Amazon.co.uk and Amazon.com though you'll have to resort to second-hand.
Using these links earns us commission at no cost to you