Writing: not get rich quick 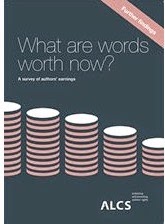 The Authors' Licensing and Collecting Society, a lovely organization which you need to sign up to if you are a UK-based writer, as they collect money from copying etc. for you, has published more detail from a study they did last year on authors' earnings. (If you feel like you're having deja vu, they published preliminary results last year.) They surveyed 2,454 writers, a mix of 'professionals' and spare timers.

When I tell people I'm an author, some assume that this can be equated with being rich, as the only authors they ever see are the bestsellers. What they ought to think is that it's a bit like someone saying 'I'm in a band' - the chances are that they play down the pub every fourth Friday, rather than packing out the O2.

The survey really brings home how far authors are from being rich. The median* income for a professional authors (someone who spends more than 50 per cent of their working time on freelance writing) is around £11,000. That's well below a living wage. Where in 2005, 40 per cent of professional authors earned a living solely from writing, now it's just 11.5 per cent. To quote the report:


A handful of highly successful authors make a very good living; for the majority, earnings from writing fall well below subsistence level.

Of course there are those high earners. The top 5 per cent bring in £100,000 a year or more - and between them account for 42.3 per cent of the total earnings. (This is why a median is more valuable than a mean**, as the vast majority of authors earn well below the mean, which was £28,577.)

There was an interesting division by genre (this is for all writers, where the overall median earning is just £4,000). The academics come out worst with a median of just £1,000 (but they do all have a day job), while audio-visual writers came out best with a median of £14,000, followed by children's fiction writers on £10,000. Us poor non-fiction types come in at £5,206.

Authors shouldn't expect huge advances either (this is the amount paid by the publisher before the book earns anything). Both the number of authors getting an advance at all has dropped and 44 per cent said their advances have dropped in the past five years - though we aren't told what happened to the rest.

One last interesting observation - only 17 per cent of those surveyed were under 45, while 54 per cent were between 45 and 64. However this may just reflect who was more likely to fill in the survey.

As always, the stats interest me and I need to give the ALCS a rap over the knuckles for saying that they surveyed 2,454 writers. What actually happened is that 2,454 started the survey, which was a 7 per cent response rate, but only 1,477 people actually finished it, and so not all of the data is based on that bigger number. Incidentally I was one of those didn't complete it, as the survey was immensely long - 65 questions.

There is also some fuzziness over what is meant by 'author'. The report repeatedly refers to this being about authors, but when you look at the breakdown of respondents, only 40 per cent identified themselves as authors, with the only other big heading being 'academic'. Only 5.3 per cent called themselves journalists. So they are sort of authors. The majority of respondents were people who earned more from books than other sources of writing, so that 'author' label is probably justified.

You can find the full report here.