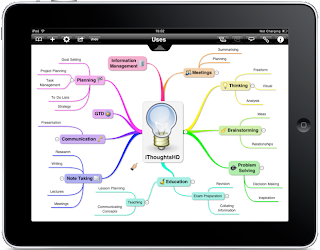 As I have mentioned earlier I have recently started using an iPad as my 'away' computer - and does everything I need much better than any compact laptop/netbook.

One particular app on the iPad has got me thinking seriously about the way software for 'real' computers is priced, and whether this pricing can hold. What you have to remember with software is that the pricing (like for ebooks) is almost entirely arbitrary. Although there is a big development cost, the unit production cost is minimal - pricing is a marketing decision. Obviously if the price is lower you have to sell more units to pay off your development costs - but then you may well succeed because they are cheaper.

Up to now having two platforms, PC and Mac has done little to drive down the cost of programs, because most people have one or the other, so there is little competitive effect. However, if someone has, say, a PC and an iPad, then there is more opportunity for comparison and resultant impact on pricing.

I use mind mapping software, both for note taking and to produce handouts for seminars. The good mind mapping software on the PC/Mac isn't particularly cheap. My personal favourite is MindManager, which is very much the Microsoft Office of mind mappers and a very powerful application. It comes in at a whopping £238.80. Another strong contender is iMindMap which is linked to the man who coined the term 'mind map' (though he didn't invent concept mapping), Tony Buzan. A copy of iMindMap will set you back between £29 for the basic 'Elements' version and £199 for the 'Ultimate' version.

Now the iPad is a very natural environment for mind mapping, and I just had to get a piece of mind mapping software. I chose iThoughts, which looks one of the best mind mapping apps (there are others at 59p), produces beautiful mind maps and can export files to all the major software as well as PDFs and images. Now that cost £5.99. That's not a typo - just £5.99. Interestingly iMindMap also has an iPad edition, but that costs £19.99.

Admittedly iThoughts has less function than the big boys on a PC/Mac - but it's function I never use. I can do everything I want at a fraction of the cost, much easier than I can on a PC. Of course there have always been cheap and cheerful programs for PCs. In fact there is a free mind mapping program, Freemind. But most cheap software for the old platforms looks just that. Cheap. The big difference is that a good iPad app has to be as good looking and usable as a top notch PC program at a fraction of the price.

Can the big boys go on charging large amounts when we can do the same thing for a fraction of the cost elsewhere? We shall see. But my suspicion is that PC and Mac software pricing is going to tend downwards. It will still be dearer than the iPad, but not by the kind of factors we see today.