May 24, 2011
As an author of popular science books I will defend to my last breath the superb effectiveness of good popular science writing to get across the message of science and the sense of wonder that goes with it. But there are, of course, other good ways of communicating science. We've seen a lot recently about TV, podcasts and video, but here are two other great examples to give science lovers hope, both of which I've recently reviewed for www.popularscience.co.uk. 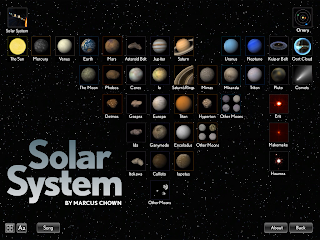 The first is Marcus Chown's beautiful Solar System app for the iPad. Okay, it has a limited audience because of the platform. And, yes, I'm getting a little boring about the iPad, but this app works so well. I'm not a huge fan of big mega-illustrated science books. I think the entertainment value wears off very quickly. But the genius of this app is that it combines the wow factor of the images plus good basic text with some superb interaction. It was interesting that without any instruction to do so, my natural inclination was to try to turn around objects (like the Sun and planets) on the screen... and rotate they did. Just occasionally this interactivity verges on the self-parodying, as when a (rotatable) bunch of bananas on a stand is used to illustrate that the Sun is, erm, much heavier than a bunch of bananas, but on the whole it is immersive.

This app is never going to reach as wide an audience as a great book. The iPad is self-restricting in a number of ways. What's more there will probably only ever be a couple of such apps a year. They are just too cost and effort intensive to create. But there is no doubt whatsoever that what we have here is a new, improved and shiny (so shiny!) way to explore some aspects of science. Brilliant.

The second example is, in a sense, totally opposite in approach. Although it's a new idea, it is technology free. We're talking a science-based board game. This is the rather clumsily named The Art of Science. At first glance it's a science/maths only version of Trivial Pursuit, which is in itself quite interesting, but in practice it's much better than that. The clever game structure means people with different areas of interest can play against each other on equal footing. It's simple, straightforward - and good fun. The only problem I have with it is that it is expensive (more than four times as much as the iPad app - but then you don't have to buy an iPad to run it). Nonetheless, science-based games are another great and underused way to get science across.

All in all I'm rather encouraged by these two products. I don't see in them the death of the popular science book, but the widening of the opportunity to spread the science message. For which I give three hearty cheers.