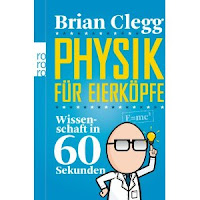 Over the years I have had many of my old business books translated into foreign languages from Turkish to Portuguese, not to mention Chinese, Japanese and Thai. (Though strangely, never French. They don't seem to like me, the French. Could it be because the name of my business creativity website www.cul.co.uk is rude in French?)

It has taken a while, but now, at last a number of my science books are getting translations, notably into German. The first has arrived on the doorstep, so I can proudly present Physik für Eierköpfe, the possibly worryingly literal translation of the Instant Egghead Guide to Physics. There are quite a few more to follow, but translation is a mysterious business.

It starts with something of an exciting bang. The publisher lets you know that they have achieved a translation. This is really good news as it involves an advance payment (except in the case of this particular book, which for complicated reasons I won't get paid anything for). These vary hugely from the pathetically small (I think I have had one as low as £50) to bigger than the original advance for the book in English. Then things go quiet, usually for a very long time. Egghead has only been a year, but often it is two or more years before, out of the blue, a couple of copies of the foreign translation drop through the post.

This is really good fun, as, unless you speak the language (I have a little German, but certainly no Thai, say), you have in your hands a book with your name on but which you can't understand a word of. It could say anything, quite possible something rude.

In principle this isn't an end to it. Just like the original version of the book, the idea is that sales of the book make royalties and these gradually pay off the advance, and then start to accrue for the author. In practice this hardly ever seems to happen with translations. The nice view is that they are generous with their advances. The less nice is that they don't bother to do the sums, because you can't really check. Either way, being translated is wonderful as you (usually) get money for doing nothing extra, plus there is the delight of having that non-English version in your hands. Which is certainly fun.

Just for amusement, here is my current shelf of publications. (The fuzzed out bit isn't my obscene publications, they just aren't my books.) Each is a unique book, either a different English edition (e.g. hardback/paperback) or a translation. More than half are translations: 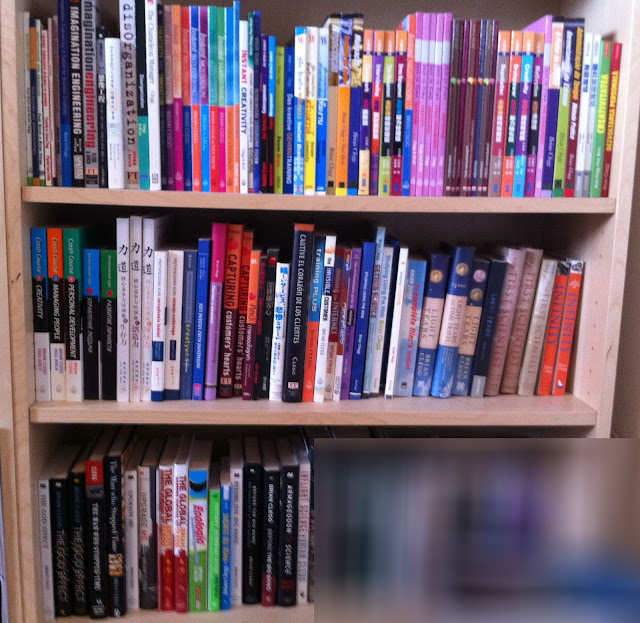