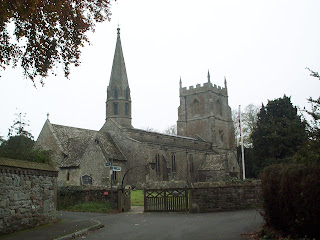 Tradition is a big thing in a small village - but it doesn't always have the right answer. I want to illustrate this with the strange case of the village organ.

Our village church, pictured here, is ancient (though a mere whippersnapper compared to some of its neighbours as it's only six or seven hundred years old), and in it, as is often the case with British village churches, sits a battered and indifferent organ (see below). It's in serious need of overhaul, and the community is in the process of raising £30,000 to give it a serious working over. Fine and good and an excellent display of community spirit. But I would question whether it really should be done up. 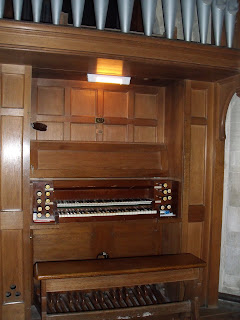 se, it must! Churches always have organs!' Well, yes. Though the vast majority of this church's life it won't have done. Until Victorian times, only the big churches and cathedrals had organs - villages like ours would have got along nicely with a village band of whatever instruments came to hand. (Funnily, the modern 'worship group', so despised by the traditionalist, is probably closer to this tradition than an organ.)

In fact, I'm not against having an organ. It's one of the few instruments that one person can play and really fill a building like that - and it sounds right. But what I do doubt is whether it's worth refurbing a never-particularly-brilliant pipe organ. I would at least give serious consideration to spending the money on a decent modern electronic church organ. These aren't like the things granny had in the parlour - they make a serious noise, indistiguishable by most from the real thing, and for that kind of money you'd get one with much more range than our current organ (which can't, for instance, manage that wedding favourite Widor's Toccata), a much wider selection of stops and much less ongoing maintenance. (Tuning? Pah!) It could be fitted in the existing cabinet, keeping the pretty pipes and all.

I could be wrong. But no one asked me, so I thought I'd say anyway.