Why isn't wireless music taking off? 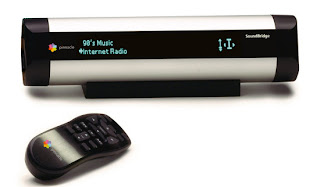 I am totally baffled by the British public.

I did consider leaving that as my entire post. It has a certain succinctness to it - but perhaps it's a little obscure without more detail. What I don't understand is why wireless music isn't more popular. These days you can buy a neat little box to go with your stereo. A couple of mystical passes and a wireless network, and this little box will let your stereo play every single track you've got squirrelled away on your PC - in my case the equivalent of around 300 CDs. You can pick and choose as you like from your collection, or use a playlist for (say) randomly selected Christmas music or music for dinner parties.

It's easy, painless - and you just won't want to go back to CDs once you've done it. Yet rather than taking off, these devices seem, if anything, to be scarcer now than they were a year ago. Pinnacle which sold the device I use (the one in the picture) is pulling out of the market. You can find a dozen or so devices on Amazon

, but there are really only a couple of brands. And instead of becoming cheaper - we should be seeing sub £50 devices by now - they are, if anything, dearer.

I have a suspicion of an answer to my own question. Whenever I propose a piece on wireless technology to the various lifestyle magazines I write for, they always say 'Ooh, it's a bit leading edge, isn't it?' or 'Much too techie hardcore for us.' Yet my wife hates trailing cables and surely can't be alone in loving the wireless connection. And lots of people have wireless internet in the home these days.

One other problem is that most of the manufacturers that are out there have been stupidly proprietary. They each have their own bit of server software to run on the computer to feed the music to their boxes. Pinnacle was much more sensible about this - they used software that comes with the PC, so you don't have to install anything... but then it's Pinnacle that are giving up.

It's so depressing. It works! It's brilliant! Do it. Now.