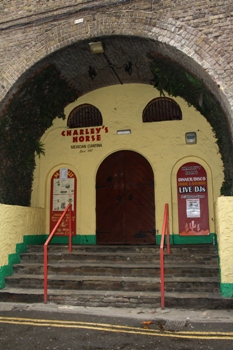 In my younger and child-free days, my wife and I (ooh, posh) sang in a vocal group called Nonessence, loosely based around Slough and Windsor. There were eight singers and the musical director/arranger/keyboardist. And on our good days we weren't bad at all.

It was with this bunch that I discovered a new and exciting cuisine - Mexican. At the time (we're talking the 1980s) Mexican food was pretty unusual in the UK, but lurking in a railway arch in Windsor (and yes, it was as dark and lurkacious as it sounds) was a newly opened 'Mexican cantina' called Charley's Horse. We went there a number of times, in part I suspect because it was reasonably priced, but also because of the novelty. After all, as the sign eventually and proudly stated, this was only the second Mexican cantina in all of England.

What is delightful about all this, and why I mention it is that we were in Windsor last Friday to attend a creakingly painful play at the theatre. (Never did I think I would have Liza Goddard looking me straight in the eye in a curtain call and I would look back with a big smile out of sympathy.) Usually we go somewhere like Brown's to eat, but as we queued to get into the town (the Horse Show was on), we drove under the railway arches and there was a sign for Charley's Horse, still standing after all these years.

And it was just the same. Of course memory plays tricks, but I would swear it was just the same. The menu was good, Mexican rather than Tex-Mex, and still reasonably priced (hence, I suspect, the way the rest of the clientele made us feel ancient). I won't bore you with details of the food, but the nachos I started with, including the likes of homemade guacamole and chorizo, were miles better than the typical chain joint nachos.

So if  you are ever in Windsor, in search of an unsophisticated but enjoyable meal, don't be put off by the location or the rather grim entrance that looks like a cross between a municipal dog's home and a seedy nightclub - take a look at Charley's Horse. (If you are tight like me, I'd particularly recommend going between 6 and 7 on Wednesday to Saturday, when they do starter + main for £10.50.)