May 10, 2012
One of my favourite TV shows, Joss Whedon's inexpicably cancelled Firefly (boo to the studio execs) invents some future slang, including the use of the term 'Shiny!' as an equivalent of 'Great!' I loved this, partly because it works so well in context, and partly because it seems to reflect the magpie-like aspect of human nature I recognize so well in myself.

I can see this in my attitude to Apple products. Every time I use my iPhone or iPad, I get a little thrill out of it, because it does the job, certainly, but also because it is shiny, not in the sense of reflecting light, but rather in the way that its design lifts your heart, and using it gives you a little smile. I've recently gone through the turmoil of the decision whether to stick with Dell (after buying them for 15 years) or switch to an Apple Mac. You can talk about all the technical pros and cons (and the ridiculous Apple pricing) but if I can't help but feel i went with the Mac because it is shiny.

The ultimate in this respect is an object I'm drooling over after Facebook helpfully popped up an advert and just for once I did actually click on it. This is an object that is shiny with total purity. The thing is, the shiny Apple products do a job. They have a purpose that is useful, and being shiny is a nice extra that makes all the difference. But this new object of desire is a product whose sole role in life is to be shiny. I can think of no reason for having one whatsoever. But I really want one because it is shiny. 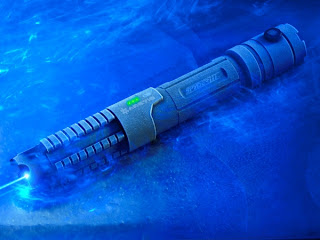 It's one of these lasers. 'The world's most powerful laser you can legally own.' (Probably not legal in the UK, but hey.) How I would have loved one as a teenager - and I still get slightly weak-kneed at the thought.

I can't see any possible reason to have one. I certainly couldn't justify buying one. But if I won the lottery tomorrow it would be on my shopping list. Because... well, you know why.