In search of the quadrilemma 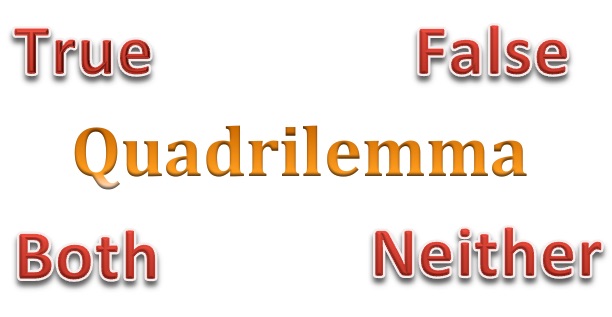 I've just read for review Amir Aczel's book Finding Zero. A lot of the book is concerned with his challenging attempt to track down a Cambodian inscribed stone that bears what is thought to be the oldest zero so far discovered. But along the way, he speculates on the differences between Western and Eastern approaches to thought that could have led to the invention of the mathematical zero.

Specifically he points out that traditional Western logic is very much binary - something is either true or it isn't. There are two options. But the Eastern equivalent, he suggests, which sometimes goes by the name of the quadrilemma, has four options: true, false, both and neither.

Now, on shallow observation, the 'both' and 'neither' options might seem like wishy-washy useless philosophical musings. And in some cases they are. But in fact they do sometimes make sense and are, in fact, also present in Western thinking - we just don't emphasise them as much as they might be emphasised in Eastern cultures.

So, for instance, Aristotle, when discussing infinity, described it as 'potential'. And to illustrate what his meant he used the example of the Olympic Games. If a little green man came down in a flying saucer (that bit is my addition to the illustration) and asked you 'Do the Olympic Games exist?' then I think you would say 'Yes.' But if he then asked 'Can you show me these Olympic Games of which you speak?' your answer would be 'No.' Aristotle's concept of potential is, I would suggest, pretty much identical to the third possibility in the quadrilemma - it is something which is both true and false.

How about something that is neither true nor false? Now here I would say I diverge from the Eastern approach, because while the third and fourth possibilities are distinct - so there is another, different case, which I'll illustrate in a moment - I can't say for certain which way round they are to be applied. But my final and distinct possibility is something that is imaginary (not in the mathematical sense, but literally) or fictional. Does a fictional character or an imaginary notion exist? Well, no. But on other hand, its existence isn't really false either, because we talk about them, think about them - and they make things happen. Yet this isn't the same as a potential, because a potential definitely can be, but isn't.