Is being an author the most desirable job in Britain?

An article in the Independent newspaper was boldly headlined with the news that 'the three most desirable jobs in Britain are author, librarian and academic.' The article begins 'Forget dreams of a glittering career in Premier League football...' Now as an author myself, I feel really thrilled that I've got the country's dream job. But as an author who likes to look at the numbers behind the headlines, I'm a little doubtful about the validity of this story. 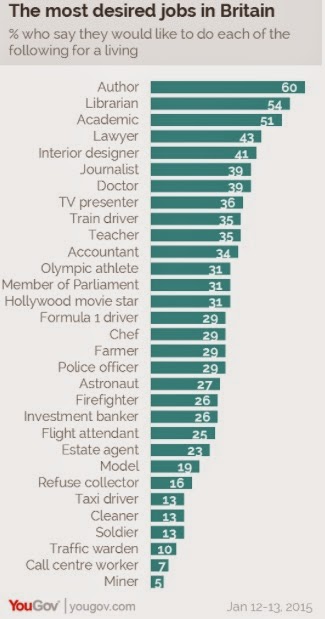 The article was based on a YouGov survey of an impressively large 14,294 British adults, and the chart to the left was the combined outcome.

Well, author is certainly up top. But when you look through that list, there are (at least) two strange additions, which I was very surprised about. No footballers and no pop stars. Isn't that strange?

So it's important to know exactly what YouGov asked - and being a responsible polling organization they give us all the information we need here.

There are a number of fiddly pollster manipulations in the numbers. The sample is weighted, most notably giving less weight to under-forties, though it's not a particularly heavy change. And rather than show people all the options, the were only shown a random sample of 8 jobs, so each particular job was only offered to between 3,643 and 3,797 people - still quite chunky samples.

But there were two particularly interesting points. The data confirm that they neither footballer nor pop star were offered - and as far as I can see, one thing YouGov don't say is how they chose the list. (I have asked YouGov to explain their selection criteria, but they are yet to reply.)

And here's the other thing. The respondents weren't asked 'what would you most like to do?' They were asked 'Generally speaking, please say whether you would or would not like to do each of the following for a living,' for each of the eight options.

So what the survey actually says is this:

Note that this doesn't mean that anyone most wanted to be an author from the selections offered. It could have been everyone's fifth choice, say. Just that more people included it in their 'would like to do' list than any other item from the list.

I don't want to knock the poll too vigorously - but there's quite a leap from what it actually measured to how the results have been portrayed in the media.