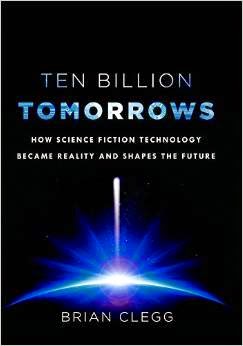 I recently posted this piece of text on Facebook and asked who remembered it.


YOU ARE STANDING AT THE END OF A ROAD BEFORE A SMALL BRICK BUILDING. AROUND YOU IS A FOREST. A SMALL STREAM FLOWS OUT OF THE BUILDING AND DOWN A GULLEY.

Given I have pretty geeky friends on FB, I expected most would spot it immediately, but many didn't. Which gives me the opportunity to pop in a little extract from my upcoming book, Ten Billion Tomorrows, which looks at how science and science fiction have influenced each other (and how science fiction really isn't about predicting the future, yet manages to shape it). I had great fun writing it. If you think it'll float your boat, it's out in December and you can already pre-order it on Amazon.co.uk and Amazon.com.

So here we go with the extract:

By coincidence, 1976 was also the year when a true computer-based virtual world came to life. It was then that American computer engineer Will Crowther, who was working on ARPANET at the time, had an idea that would capture of the hearts and minds of computer enthusiasts – me included. Crowther was a fan of the fantasy pen and paper role-play game Dungeons and Dragons, which came out in 1974, and was also having family issues at the time. A caver, he had mapped out a real cave system on an early computer, and used the idea (if not the actual map) as an inspiration when he wanted to have something to play with his daughters after his marriage break-up. So he put together a simple game that used the computer’s ability to respond to a series of text commands to build a virtual world, which would later be improved on by graduate student Don Woods, who strengthened the fantasy elements in the game.

When playing, the early gamers would be told their position in a series of linked caves and could ask to move in different directions. They might discover swords or treasure – or, for that matter, deadly monsters – all of which were summed up with a few, tightly conceived words. Any pictures were in the imagination of the player. Crowther called his game Adventure, set in Colossal Cave. This wasn’t the first game to make use of computer power. The stand-alone tennis game Pong, running on TV sets with a simple computerized controller to produce the signal, came onto the market in 1972. But Crowther’s Adventure was the first computerized adventure game (giving the name to the genre).

In 1976 I moved from the bustling world of Cambridge to the isolated campus of Lancaster University in the north of England to take my masters degree. Until then, my use of computers had been limited to running simple programs written in languages like Fortran on a stack of punched cards. But Lancaster had a secret computing weapon in George 3, a computer operating system running on an already antiquated 1900 series mainframe from the now long-defunct ICL company, an operating system that transformed the way that the user interacted with the computer. Instead of punching a set of cards, feeding them through a reader and waiting for the output to churn out on a line printer, users communicated with George III using teletypes, electronic typewriters that could both take input from a keyboard and respond by typing controlled directly from the computer. Suddenly it was possible to have a conversation with a computer in real time.

I made a small amount of use of George 3 for my coursework. But by far the most frequent command I would type after logging in to the system was ADVENT. The command to run the game Adventure, which had been ported from its original implementation on a DEC PDP-10. I would play long into the night under the stark fluorescent lights of the computer lab, immersed in a world that could only be accessed via the imagination and the clattering print-head of the teletype:

YOU ARE STANDING AT THE END OF A ROAD BEFORE A SMALL BRICK BUILDING. AROUND YOU IS A FOREST. A SMALL STREAM FLOWS OUT OF THE BUILDING AND DOWN A GULLEY.

When in response I typed GO IN, the system would respond:

The adventure had begun. I genuinely can still feel the hairs standing up on my arms when I read those nostalgic words again. There had never been anything quite like it. It was a whole world that you interacted with through text – these text adventure games have become known as interactive fiction, and the name fits well. Perhaps most extraordinarily back then, it was a computer program that responded to ordinary words, rather than the terse instructions of a command language. The game would stay with me in 1977 when I moved to work at British Airways, where we had a PDP-10 and were able to play the original in all its glory.