The Museum of the Future - Review 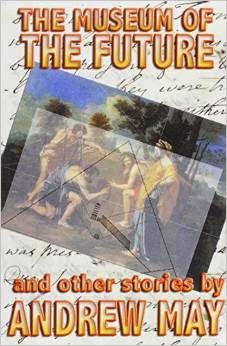 I was a little bit wary of this collection of short stories, as it has the look of being self-published even though it isn't (specifically the paragraphs have gaps between them, like this blog, rather than the indented start you always see in a 'real' book) - but I needn't have worried because this isn't reflected in the content.

My suspicion is that these are Marmite stories - you'll love them if you like period writing. The first, for instance, is (intentionally) in the style of the wonderful M. R. James' Victorian ghost/horror stories, and several others adopt a Victorian style. I can't say every story worked for me - but that's true of pretty much every short story collection I've read, even those by masters of the art like Ray Bradbury, Gene Wolfe and Neil Gaiman. The ones that did work, were genuinely engaging and intriguing.

Andrew May gives us a mix of science fiction, fantasy and mild horror. I think this is a collection that works best for those who are well versed in these genres, as you will get the references and the cleverness of stories like The Call of Cool-o, which is an H. P. Lovecraft style plot written in the style of Philip K. Dick, or The Museum of the Future, which is essentially the same story (each set in 2012), told as the story would have been if written in 1912, 1932, 1952, 1972 and 1992, employing the styles and recurring themes common in each period. Quite often 'Fortean' themes are explored, something of a speciality of May's, using a story of real life weirdness* as a setting for the fiction.

If I had to pick out a favourite it would be the relatively long story (many are only a few pages) A Case for Crane, which sees the main character watching a 1970s US crime drama, which he gets pulled into at various levels, sometimes inhabiting the mind of the character, sometimes the actor playing the character and sometimes the author, giving a strange and mind-twisting meta-view of the story. This sounds messy, but actually works really well. And I'm a sucker for period tales set in Oxford or Cambridge, of which there are several, though I should point out that all the best Cambridge colleges have a Senior Combination Room, not a Senior Common Room as mentioned in The Rendelsham Magi, with its unusual twist on the star of Bethlehem.

May's writing is assured and mostly enjoyable. His only weakness, I'd say, is that his female characters (when there are any) are straight out of the 1940s - either mousy and slightly plump or dominating Amazons. This is a very male-oriented collection of stories.

It's a mark of the effectiveness of the storytelling that there were several where I wanted to to find out more, to have the story taken on further. What's more, I took the book with me to read on the train, intending to put it aside for the important physics book I should have been reading last night, but instead I read on. If you like genuinely inventive and interesting short fiction, often with a period feel, it's well worth a try. You can find it on Amazon.co.uk and Amazon.com (I'd go for the Kindle edition if you use ebooks, as it's significantly cheaper, and I think short stories are amongst the best things to read in this format).
Using these links earns us commission at no cost to you

* Well, as real as you might consider the likes of a haunting or the Loch Ness Monster to be. (Not that  Nessie is featured, but it's that kind of thing.)