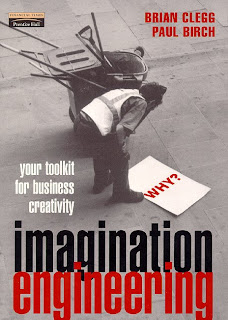 A long time ago, in a galaxy that bore a distinct resemblance to the Milky Way, I co-authored a book on business creativity called Imagination Engineering. It did quite well and it still sells today. This was when my colleague Paul Birch and I were first setting up giving training in creativity, and the main purpose of the book was to be the guide to our method. It described our approach to stimulating ideas and solving problems.

Something we thought that might be useful was to give some sort of simile or metaphor that would help us to describe and encourage the process of producing an enhancing ideas. We wanted it to be something that was all about pioneering, about boldly going and all that kind of thing. So we hit on the simile of civil engineering, saying our approach to creativity was like being the first to build roads and railways and structures out in a new and unexplored land.

To be honest, we don't use the simile anymore, as it got in the way more than it helped. One of the essential learning points of creativity is that you will fail sometimes. It's all part of the creative process. (Which is why politicians struggle so much with anything creative - they can only see failure as being a disaster. I think it is because they played too many competitive sports at school.) So that wasn't a problem - in fact it has helped us refine the approach.

Even so, the simile is still there in the book, which is why we were initially rather disconcerted, but then delighted to discover this in Yellow Pages:

Of course, the civil engineers we had in mind were the pioneering kind, not the kind that lay sewer pipes in Surbiton high street. But even so it was a salutary reminder that not everyone views things the same way. That was a genuine entry, by the way. It disappeared after a few years, presumably as a result of complaints from the Institute of Civil Engineers or some such body.

I wonder, has Yellow Pages or its equivalents ever carried any equally entertaining accidental comments on the topic advertised?