What does 'live' mean to us? 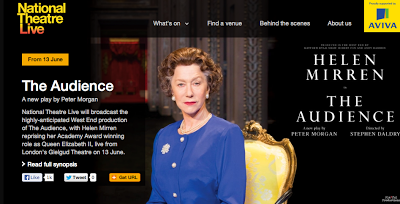 The Thursday before last I went to see a play that was being performed that evening in a London theatre. I was in Swindon. This was the NT Live presentation of The Audience. The play itself was on in London, but we were watching it beamed into our local cinema.

I have to say, the experience was excellent. The play was very good and the visuals were excellent. They even had programmes, not to mention wine and beer for sale in the interval. And the staff were unusually attentive as we went out more like... well, a theatre than the local multiplex. So many thanks to Joe and Sarah for organizing it, as we would have never have got round to it.

It got me to thinking about the nature of seeing something live. With some kind of events, there is definitely something special about seeing it live, even if it is via a video link. It was interesting that someone I know online saw the same production from a cinema on the Isle of Man - and I had a real sense of shared experience, far more than if we had both just watched something on the TV. I think it is the immediacy and more real-feeling aspect of the location. Being in a cinema is a lot more like being in a theatre than sitting on the couch at home.

Increasingly I tend not to watch TV shows truly live. I'd say around 75 per cent of my viewing is either timeshifted using a PVR or streamed from Netflix. And that's fine. But there is something special about truly watching it live. The idea that it really is unfolding in front of you. Even the possibility that something could go wrong as you watch. It is why at the tender age of 14 I stayed up all night to watch the Moon landing. You just had to be there.

Of course really being there is often best. If you take Wimbledon, for instance, the actual view is much better on TV, but I remember my only time at the real thing, seeing Jimmy Connors in his last ever semi-final, far more than anything I've ever seen on screen. But there is no doubt that with events like NT Live we are making it a lot easier to almost be there where it's not practical to do the real thing. And we got home by 10pm without an immense hole in the wallet. What's not to love?