Who was the monkey in this trial? 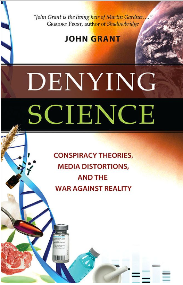 Anyone who knows anything about the battle to preserve rationality in supporting the theory of evolution against marauding creationism will know of the 1925 Scopes trial - or 'the infamous Scopes monkey trial' as it is often known. What I didn't realize until reading John Grant's excellent rallying cry for embattled reason, Denying Science, was that the whole Scopes trial was a publicity stunt.

It's not that there wasn't a serious issue to be fought. The trigger was the signing of an act prohibiting the teaching of evolution in universities and schools in Tennessee. But the Scopes trial was apparently one of those good ideas that civic leaders have when they've had a drink or three down the local saloon. Apparently the dignitaries of Dayton, where the trial took place, spotted that any such trial would bring a lot of cash into town. So they got together both the prosecution and the defence, and looked for a likely candidate as defendant.

Scopes, a general science teacher (who had probably never taught evolution) was approached and agreed to be prosecuted. The town's bigwigs then went on a hunt for celebrities to be involved in the case. They failed to get H. G. Wells as a witness, but they succeeded superbly in getting hold of the lawyer Clarence Darrow to represent Scopes. It's a mark of how much this was all a setup that one of the main prosecution witnesses, pulled to pieces by Darrow, William Jennings Bryan, offered to pay Scopes' fine if the prosecution was successful.

I ought to stress that the fact that the whole thing was a setup in no way contravenes the effectiveness of the demolition of the prosecution done by Darrow. This was the first of many clear legal decisions in favour of evolution - though in the end, the legal system with its ancient Greek idea that the best way to get to the truth is have an argument and the best argument wins (as opposed to science, which is dependent on data and experiment, rather than the quality of the legal team) is not a great way to make an appropriate decision. There are still legislators, particularly in the US, attempting to impose creationism and 'Intelligent Design' on schools and colleges, which have no place in the science classroom (except when studying the psychology of self-deception).

But I do find it fascinating that the Scopes trial, in many ways the pinup of the good guys in this battle, was a setup job to get a town some publicity. And the fact that we are still talking about it today shows what a good job it did.