It's a fraction but my fraction

June 27, 2013
The way most of use computer programs makes sledgehammers and nuts a minor infringement on the 'getting the scale right' tally. Our requirements are orders of magnitude simpler than the programs' ability. 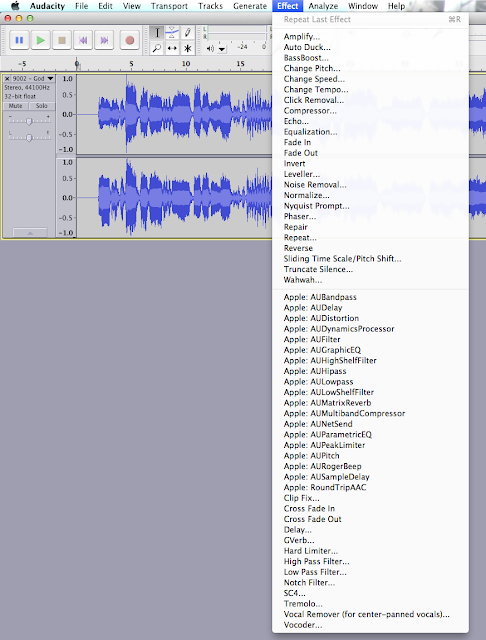 Take Audacity, the impressively free audio editing program I use. It can do all sorts of exciting things. Just look at that huge menu of effects of which I use... one. The program comes in hugely useful when I edit the tracks recorded for my company's increasingly vast emporium of organ pieces and hymn accompaniments, but my routine is always the same. Read in a track, make sure the lead in and out are consistent times, wipe any audio before the playing, fade out the audio at the end. And save. Touching a tiny part of the application's capabilities.

Though it's not so extreme most of us also have a limited repertoire in more familiar programs, whether it's an office suite like Word, Excel and Powerpoint, or image manipulation. Just like Audacity, the image editor I use, Pixelmator, has vast power - it's rather like Photoshop without the diamond encrusted price tag. But I only ever use a tiny fraction of it.

So some people think that the answer is pared down, super-efficient programs that just do the essentials. The Mac world is littered with writing apps, for instance, many of which boast that they only provide the basics, clearing away clutter, helping you concentrate on the task at hand.

But therein lies the rub. What is the task? What are the basics? Because, while I only use a few features of Word, they are my features. The features that are important to me. I've been involved with PCs since the very beginning and many of the early word processors didn't have a word count feature. It simply didn't occur to the developers - why would anyone want to know how many words there are in a document? And that was fine from their viewpoint. In fact most business users don't really care. But if you are a writer there are two certain facts. First, you need a word processor. Second, it needs to be able to do a word count.

As a writer you don't need most of the fancy layout abilities. When someone asks me how to do a page border or why fancy table layouts aren't working I hoot with amusement. I don't care. These aren't my features. But for others, they are essentials.

So next time you hear someone moaning about 'feature bloat' and how ridiculously over-complex applications are, and how the developers need to get back to basics, raise a quizzical eyebrow. 'Yes, but whose basics?' you should say. And feel suitably smug.