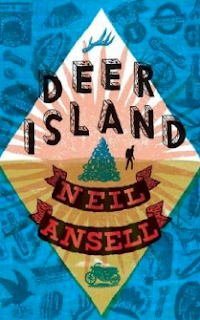 This is a book I would never have read if I hadn't met the author in a writers' forum, but I am very glad I did. It is way outside the classifications I generally read. In fact it is probably outside classification altogether. It is a sort of social issues/nature memoir.

Realistically, the author's life experience is way outside mine. Leaving aside the two main topics of the book, in the intermission, as it were, he is riding an ancient motorbike around the far North of the UK with his Swedish girlfriend. In a rough Scottish town he is told to keep his voice down as it's a rough place and if he were noticed it would be provocative. He comments he had often been told this - in Belfast, Harlem and Bogotà. How unlike the home life of our own dear Queen. Or for that matter, most of us dear readers.

If, like me, you find flowery descriptions of nature off-putting, don't be thrown by the introduction - like the Hitchhiker's Guide to the Galaxy which famously begins ('Space is big. Really big. You just won’t believe how vastly hugely mindbogglingly big it is. I mean you may think it’s a long way down the road to the chemist’s, but that’s just peanuts to space.') after a while it settles down.

The main thrust of the book alternates between life pretty much down but not out in London and life in semi-paradise on the Hebridean island of Jura. The London segments are the more gripping - one working with a charity for the homeless and the other as a squatter in a building with what starts as a quite a gentle experience but goes down hill over the year the author was there. I can relate slightly to the first of these - it reminds me in some ways of my time as a volunteer with a rather down-at-heel branch of the Samaritans - but the second is scarily alien.

Then there is Jura, twice visited, so different in character from the city. This I find much easier to relate to. The author mentions hitchiking a lot elsewhere, and when his bike broke down on Jura on the first visit, he and his girlfriend had to hitch to the village. I have never hitched in my life, I am far too wary. But when I spent 2 weeks  on the next island out from Jura, Colonsay, it was notable if ever you walked along the road, every passing car would stop and ask if you wanted a lift. You didn't hitch a ride, they hitched a passenger.

This is a short book - if it had been fiction, it would be a novella - and you can read it in afternoon. It left me wanting more, and having read it, I suspect I will savour it much longer.