Review - Why Science Does Not Disprove God 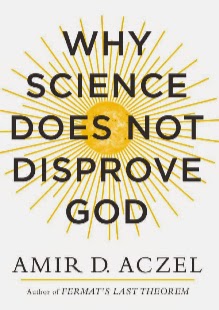 There have been a good few attempts to counter Richard Dawkins' best selling The God Delusion (I know I've reviewed this somewhere - I think it was on my old Nature Network blog, but I can't find it, so I'll have to review it again some time soon!), but I think this is one of the more interesting, as it's written by a mathematician and physicist turned science writer, who certainly knows a lot more about physics than Dawkins.

Aczel approaches this task with a lot more science than I recall Dawkins using. Along the way we get summaries of quantum theory, cosmology, evolution, the mathematics of infinity and more, all used to show the flaws in the 'science disproves God' argument. These have to be fairly rapid summaries - there are plenty of better books covering each subject in detail - but might be helpful to give context to those who aren't familiar with the scientific theories that get thrown around in these kind of arguments.

There's a degree of subjectivity, inevitably, but for me Aczel makes three quite strong hits. He shows the weakness of the anthropic principle as a way of deriving anything (something most scientists are perfectly well aware of), he makes the multiverse interpretation of quantum theory as a way to explain the strange 'tuned' nature of our universe look a bit silly, and most interestingly for me he demolishes the negative aspect of the 'God of the gaps' argument.

This is essentially a suggestion that the tendency of non-fundamentalist religious believers to accept scientific theories that contradict early religious teaching results in God being just responsible for 'the gaps' left behind by the science, making the God concept more and more pointless. Although Aczel doesn't use this terminology, I think he nicely demonstrates that the current position is more 'science of the gaps' - almost all the big questions like how could a universe start from nothing, why do the charges of the electron and quarks balance out the way they do, how did life start, what is consciousness and how did it emerge are still left to be answered. Science does a wonderful job, but frankly we've only managed the easy bits.

So, quite an interesting book that successfully demonstrates the emptiness of much of Dawkins' argument. However, on the down side, it isn't as readable as a Dawkins book, some of the history of science is too simplistic (we get the good old myth that Giordano Bruno was burned to death 'for believing that the sun was a star and that the universe contained other civilisations' which is utter tosh), and it suffers from being a negative book, constantly attacking Dawkins et al, which gets a bit tedious after a while.

I have always argued that the only scientific viewpoint on God is agnosticism rather than atheism, as atheism espouses a belief without evidence, but in the end that's all this book can and does deliver. Science doesn't disprove God - case closed. So what it does in its own right is limited, but I do think it is useful in highlighting the way the opposite attempts from the 'new atheists', as typified by Dawkins, to show that science can somehow manage this impossible feat is flawed and hollow.

You can get hold of Why Science Does Not Disprove God at Amazon.co.uk and Amazon.com.
agnosticism atheism beliefs religion science