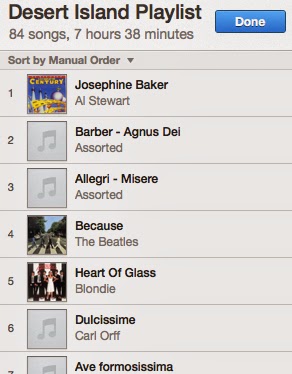 The radio programme Desert Island Discs goes from strength to strength, but if I'm honest, it's a bit dated. If you don't know it, guests on this Radio 4 show list the eight records they would take with them on a desert island (plus various biographical bits).

It's all very well, but we really wouldn't like to be so limited, would we? So I've devised a new version - Desert Island Playlist. The rules are simple. Construct a playlist of your favourite music. You can have as many tracks as you like, but you are only allowed one track per band/artist or one piece per classical composers. What would yours be like?

I've listed mine below, and for those who like techno things, I've embedded a Spotify version of most of the playlist here so you can listen to them:

So here we go. I warn you, it's quite long. The order is simply the order I came across the tracks on iTunes, so it's in 'no particular order', as they say:

UPDATED - In case you don't bother to read comments, M. G. Harris bullied me below into whittling it down to 10 (I couldn't manage the eight under traditional Desert Island Discs rules). It's a struggle, but these would be my 10: