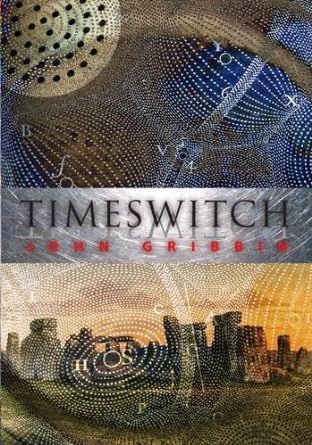 This is one of the best science fiction books I've read in ages - it could have been written for me, combining as it does hard science, an element of historical fiction and some mind-boggling twists. It even nearly achieves something that had seemed impossible.

John Gribbin is one of the UK's top writers of popular science books, but he proves here that he can put his hand to fiction writing with masterful ease. In Timeswitch, a device is discovered under Stonehenge that provides a wormhole style portal into the past. But it can only achieve jumps in units of 300 years, and the further back you go, the less time you have in the place you visit before you are dragged back to the present. The book's present is an alternative world, where scientific discoveries were made much earlier than in our reality (Galileo comes up with special relativity, for instance), as a result of which we were hit by global warming much earlier and the present is almost uninhabitable. The scientists working on the portal try to use it to change the past and save the environment with fascinating consequences.

There were so many things I liked here. It was well written and kept me pushing on to discover more. The way Gribbin handles the possibility that changing the past might result in different futures and hence different versions of the time travellers is brilliant - reminiscent of the multi-layered delights of one of my favourite films, Inception (this would make a great movie or TV series). The historical periods are well conceived and I was impressed with way the author plays with the different people in the past to construct a new history of science.

That's where the 'nearly achieves something that had seemed impossible' comes in. I have always thought that it should be possible to write a good piece of fiction that also gets across some real science in an effective way. This is by far the best book I've ever seen for doing this - with the only problem that the terminology used is not the ones we use, and the historical context, so important in popular science, is here all fictional.

However, this doesn't stop the book being a superb piece of science fiction (with historical fiction touches). And even when you think you can see what's coming, there's a clever twist that changes things entirely. If I have any complaint it's only that I suspect in a real alternative history like this far fewer of the familiar names would crop up in science, because modern physics has got so mathematical that most of great physicists in history simply couldn't handle it. I'm thinking particularly of Cavendish, who is given an important place in developing advanced physics, but as far as I'm aware had no mathematical ability. It's a minor niggle that wouldn't bother anyone who wasn't a popular science or history of science nerd.

All in all a delight. Available in paperback and ebook from Amazon.co.uk and Amazon.com (and all good bookshops).
Using these links earns us commission at no cost to you
alternative history fiction history of science review reviews science fiction time travel