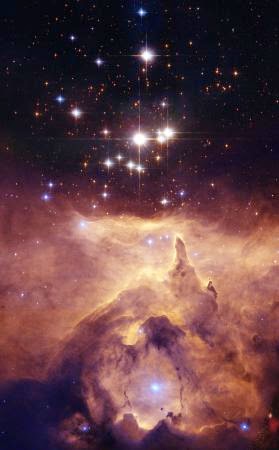 Personally, I think stars are underrated. Not the ones in the sky - if it weren't for one of them, the Sun, the Earth wouldn't exist (and even if there was an Earth, there would be no life on it because it would be far too cold). For that matter, if it weren't for stars in general there would be no atoms other than hydrogen, helium and a touch of lithium - making the whole concept of a planet (or a person) inconceivable. So the stars of the cosmos are seriously rated.

Nor am I talking about the stars of stage and screen. Because, let's face it, most of them are seriously overrated. I refer instead to the habit of awarding stars in reviews.

A good while ago I wrote to the journal Nature, complaining about some of the book reviews that they carried. I pointed out that the (long) reviews said nothing whatsoever about the book itself and whether it was any good - which is what the potential reader wants - instead, the review merely gave the reviewer a chance to do his or her potted version of the theme of the book. They said what the book was about, but not if it was any good or whether you should read it. I got what was, frankly, a rather snotty email back from someone at Nature saying something to the effect of 'ours aren't the trivial sort of reviews you have on www.popularscience.co.uk. We aren't going to start giving a book stars like you do.'

Personally, I think this is a mistake. Life is too short to read every review - it's very handy to be able to check out the star rating and then decide which reviews to read. I'm not suggesting we only take notice of the star rating, but it's a good indicator of whether the reviewer considers a book (or film or whatever) really bad or excellent - in both cases suggesting the review is worth getting into in more depth. Assuming, of course, the review does give you a judgement on the book, as theirs failed to do.

However a star rating means different things to different people, so I thought it would be useful to finish by giving a quick guide to the way we use the star rating system on www.popularscience.co.uk:

* - Just doesn't work for us. If you think like us, avoid it
** - Has some interesting points, but probably only for a limited audience
*** - Good solid book, well worth reading if you are interested in the topic
**** - Excellent book that any popular science fan would want to read
***** - One of the best popular science books of the year