October 06, 2014
When I was young, I believe a lot of people went to the Saturday morning pictures (cinema) and amongst other things, they would watch cowboy adventures in which it was very easy to tell who were the bad guys and who were the good, because the bad guys wore black hats, and the good white. When I grew up I soon realised life was more complicated. It helped, I think, that I went into the sciences, because the message there is usually 'It's more complicated than you thought', a message that sadly doesn't seem to have spread to many people's politics. 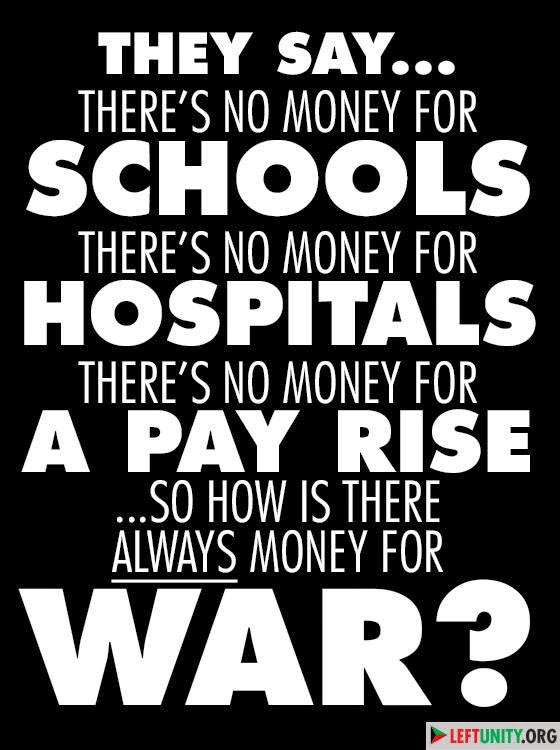 I'd say the majority of my friends on Facebook are left wing politically (I will discuss my own POV at the end), which is fine, but what does irritate me it that they have the tendency to repost political propaganda that suffers wildly from the black hat/white syndrome. The other day, I had cause to raise both eyebrows when confronted with this piece of work, apparently from leftunity.org.

For me, this is the worst kind of black hat/white hat politics, because there is a serious point, worth considering behind the illogical rhetoric - but it is so covered up by that rhetoric that for anyone who doesn't have a knee-jerk positive reaction to the message, it is counterproductive.

Why don't I like it? To start with, the statements on the poster (or whatever you call these e-snippets) are blatantly untrue. There is money for schools - c £98 billion, and there is money for the health service (I'm taking "hospitals" to be a one-word version of "the health service") - c £133 billion. That's rather a lot of money, actually - so it's hard to imagine why anyone would say 'there's no money'. Is there money for war? Yes, there is money for that too - currently around £33 billion of military spending, though a fair amount of this isn't strictly 'for war'. So the statements themselves are almost meaningless, and mostly untrue.

However, I'm told I'm being too literal (allegedly a failing of the scientific education, though why would you want not to be literal about political information unless your intention is to mislead people)? What this really means is that we can't find more money, on top of the budget, for schools and hospitals, but we can for war. If this were true, it would be worth of serious comment - but I haven't seen any evidence that the fact we might do some bombing raids on the disgusting and despicable ISIS, which is what triggered this campaign, is going to mean we need extra money for the defence budget. So, again, the comparison appears to be an attempt to mislead or confused.

When I pointed this out, the person who posted it responded by saying 'I've lost my inflationary pay rise and my increment because there's "no money". Money for cruise missiles at £1.5 million apiece, though.' While I sympathise to some extent (while pointing out that, as someone who is self-employed, I current earn almost exactly the same as I did when I left BA 20 years ago, with no 'inflationary pay rise' over 20 years), again it's a false comparison. You can argue that the budget was wrong, and we should have had more for his/her pay and less for defence (unless he/she happened to work in defence). You can argue, as I probably would, that we could save a lot by getting rid of Trident. But that's not what this campaign is saying.

The reason I think this kind of thing is a real shot in the foot comes back to my own political affiliations. I am a floating voter. I have voted for all three main political parties in my time, though by default I am probably a liberal democrat (cousin Nick insists). But there's a real lesson from that one time I voted Tory. I come from a naturally Labour voting background - from a North West, working class family that read the Manchester Guardian until it did the dirty and moved down south. I wouldn't have thought of voting Tory. But when I had my first chance to vote, while at university, I got so fed up of the way my left wing friends distorted the facts in exactly this kind of way that I voted Tory in rebellion.

So, by all means make your point about everything the other parties do wrong. But do it honestly and fairly, without ad hominem attacks, and without using meaningless propaganda. Then I will listen with interest. But do this kind of thing and it will instantly make me bolshie and inclined to do the opposite.