Pass me the Haynes, I've an alien dissection to do 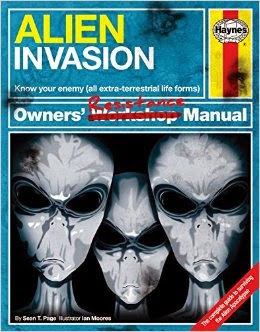 There was a time when Haynes manuals were, frankly, rather stuffy, step by step books, beloved of those who liked taking a car apart in the garage, and mocked by everyone else. But the publisher has relatively recently realised that the books' distinctive form can be applied to all kinds of different subjects. We've seen, for instance, a maintenance manual for the Death Star and a UFO investigations manual, which took a pretty straight approach to the possibility that UFOs were indeed alien craft.

However, the latest Haynes to join my reviewing shelf is unashamedly a work of fiction - though it technically never admits this, maintaining a straight-faced attitude at all times. The Alien Invasion Owners' Resistance Manual is allegedly written by a member of the UK's 'Ministry of Alien Defence' and is packed full of entirely made up, but entertaining statistics and information on the various alien invaders, their modus operandi and just what it is they're up to. As the introduction states 'This annual is not designed for astronauts, boffins or eggheads. It's for everyone. In true Haynes style, we aim to demonstrate how with the right knowledge, training and the largest available roll of aluminium foil, the concerned citizen can really hit ET where it hurts.'

Throughout, the manual is given the look of being heavily used with oil stains and what may be cigarette (or ray gun) burns on most pages. The author has also kindly 'hand written' comments to add to the information. Someone has put an awful lot of work into this - and it is often very entertaining. I love, for instance, a section which begins 'It may seem strange to readers that while classic TV series such as Firefly are cancelled, reality shows with their "follow-a-nobody" formula are regularly getting into their fifth series,' and goes on to suggest that this might be an alien plot to damage the IQ of humans.

Inevitably some parts work better than others, and once the book has established the main categories of alien and the nature of their ships, it can feel a little bit samey as it then goes through defence strategies and the like. In the end it is a single joke carried to extraordinary lengths. But you have to admire the impressively straight-faced consistency and nice attention to detail (one section is redacted with the remark 'For legal reasons, Haynes Publishing would like to state that a cloaked Draconian vessel did not crash in Nigeria in 1983, and that three reptilian bodies were definitely not recovered and taken to Area 51') - overall it does a far better job than I imagined possible.

What's scary is that it really wouldn't surprise me if some people take this book seriously.

If you want to be prepared, and to have the best design for a stylish yet practical tinfoil hat, you can find the manual on Amazon.co.uk and Amazon.com. It's probably not suitable for younger children, but should work for sophisticated 10-year-olds who can get the joke, through to adults who enjoy a good alien invasion romp.
Using these links earns us commission at no cost to you

P.S. - Despite the title of my review, unless I missed it, one thing it doesn't mention, perhaps for copyright reasons, is the infamous 'alien dissection' movie.