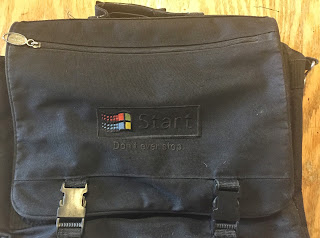 The trivial answer, is 'Yes, move on.' But there is a bit more to the question 'Is it really 20 years since Windows 95.'

I was present at the UK launch of this radical update of the world's favourite (ahem) operating system, in its time as significant a step forward as the move to Windows 8/10. At the launch, as a very newbie tech journalist, I was sat next to the technology editor of the Sun and surprised to discover that he wasn't a cockney wideboy obsessed with topless women, but an urbane and interesting chap.

However, the reason the Windows 95 launch was so significant, apart from being the origin of my now rather decrepit shoulder bag (above), is that it emphasizes how much the world has changed in those 20 years. Part of the Windows 95 launch was something called MSN - the Microsoft Network, now only really exists in the psyche in the form of MSNBC. This was a mechanism for Windows users to interact - a competitor to AOL, Compuserve and Apple World. I remember asking a Microsoft representative 'What about the internet?' and the feeling was 'We'll keep an eye on it, but it's not really all that significant. Private networks is what it's all about.'

So for me, although the step forward in the operating system was significant, what really stands out is how a big and savvy player such as Microsoft could have had it so wrong about the internet, just 20 years ago. And technology misreads don't come much bigger than that.