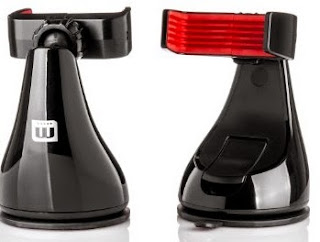 A couple of times recently, for boring technical reasons, I haven't been able to use my Sat Nav and instead used my phone for GPS navigation. The software was fine, but the problem I faced was keeping the thing somewhere it could pick up GPS satellites and I could see it if necessary.

Luckily, one of my daughters had left an old car phone mount lying around the house. The theory was good - a sprung clamp held the phone in place and the thing attached to the windscreen with a suction cup. But the practice wasn't so good. Because the arm was long, the phone wobbled up and down with every little bump we came across, and though all seemed well for about an hour, the mount would then, at random (and usually during a difficult manoeuvre like going around a roundabout) fall off the windscreen, sending my precious iPhone plunging towards the floor and my leaving me navigationally challenged.

Dismissing the old device, I've now got hold of something significantly better. Apart from anything, the Montar mount looks stylish and is well finished. But most importantly, it has so far stayed in place despite everything I've thrown at it. I don't usually leave a mount in place all the time, but as an experiment I left this on all day, then came back to it in the evening, inserting the phone for a two hour drive - and it stayed suitably stuck. In fact, so stuck that I couldn't get it off initially and had to wait until the sun warmed the car up before I could move it.

This was doubly impressive because, unlike the old kit, this one was fixed to the dashboard rather than the window. Like many modern dashboards, mine, on a Hyundai i30, presents serious challenges for any would-be attachment. The dashboard surface is curved, not flat, and textured too. I had assumed that getting a suction cup to fix would be impossible. But the Montar mount has a sticky gel bottom surface on the sucker than gave it a surprising grip on that unlikely surface. (If all else fails, it comes with a stick-on smooth disc to leave on your dash, but I don't like sticking things to my car, and I didn't need it for my dashboard.) I ought to say that looking at the Amazon reviews one or two people haven't had the same success, so there may be some car designs which are beyond it.

That apart, it's a 'no news is good news' report. It did its job. The phone stayed where it should, didn't wobble about, didn't fall off and was easily accessible. Because the mount was so solid I could insert the phone or remove it with one hand, without risking dislodging the whole thing.

It's not the cheapest car mount for a phone, but certainly the most impressive I've seen. Apparently I may need to 'wipe the gel suction bottom [sic] gently with wet cloth and dry completely until the stickiness comes back,' which I hope I don't have to do too often, as my idea of a car accessory is something you shove in the glove compartment and come back to three months later and it just works. But hopefully that maintenance will only be required now and again. Otherwise, it's a real success.

See the mount at Amazon.co.uk and Amazon.com
Using these links earns us commission at no cost to you