The Land Across (Gene Wolfe) review 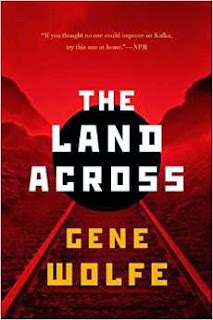 Fans of Gene Wolfe's fantasy writing will recognise distinct echoes of what I'd regard as his masterpiece, There Are Doors, in this recent novel, The Land Across.

I don't think this is as good a novel as There Are Doors, but it certainly has plenty of interesting features. If you don't know Wolfe, you could read it and think it's atmospheric in a rather clunky way, but not much happens. It doesn't at all surprise me that a bad Amazon review thinks it is a badly written book about Slovakia, totally missing that this is a fantasy. If you were to describe the plot (which I won't), it wouldn't sound all that exciting. But with Wolfe, you have to absorb the way he tells the story, to inhabit the quirkiness and the tiny details where things aren't quite normal - and that way you can find plenty in its subtle depths.

For most of the book, we could be occupying a fantasy-free, simple, isolated, former Soviet dictatorship (Belarus is probably the closest real world parallel, though Wolfe's country is a lot more low tech), with a degree of Kafkaesque bureaucratic nightmare and a not very secret secret police playing a major role in everyday life. As part of Wolfe's exploration of the nature of dictatorship, it's quite easy for the reader to feel sympathetic with the secret police when they are effectively on the side of good, but always with the uncomfortable frisson that this shouldn't be right. However there are also supernatural elements that simply fit in as part of the way life is. Although surprised, no one really changes the way they behave because of them - the supernatural is part of everyday life.

Another Wolfe characteristic you'll find represented strongly here is getting three quarters of the way through the book without being sure what's going on (though the setting is less ambiguous than in There Are Doors) and reaching the end to realise there are plenty of threads that were never tied up and left hanging to jangle your nerve endings. If you like a nice, neat, tied up plot this isn't the book for you.

Without doubt one of Wolfe's more significant novels of the last decade, though not as good as The Sorcerer's House, and a clear indication that he's still got the touch. Arguably it is not the best book with which to start reading Wolfe's fantasy novels (I'd recommend Castleview or Pandora by Holly Hollander) but a strong addition to the canon that is essential reading for any fan.

You can find The Land Across at Amazon.co.uk and Amazon.com
Using these links earns us commission at no cost to you