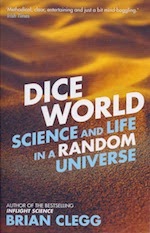 As anyone in the final week before an election knows, statistics are easy to misuse, whether accidentally or intentionally. It really quite saddens me to see friends, who know enough science not to massage figures to present the case they want, cherry picking, mislabelling and generally giving statistics as much mangling as they like as long as it shows the opposition in a bad light (it's odd, but they much more often seem to use stats to show how another party is bad, rather than the positives of their favoured party).

Occasionally I point out one of these errors, but this tends to get me labelled an enemy of the cause, so it probably isn't worth it. However, there's another example of statistics being manipulated where I shouldn't feel the wroth of political sensibilities, and that is on the matter of lotteries.

For some reason those with a scientific bent love to produce a flurry of probabilities that show how entering lotteries is for suckers, because the odds are so astronomical. As I point out in Dice World, my book on probability and randomness, this is often due to a total misunderstanding of the nature of entering a lottery. Seen as an investment, it is certainly ridiculous. However, seen as a game, it's a different matter. What lottery players pay for is not the statistical benefit of the prize times the chance of winning - an unimpressive payback - but the anticipation. It's about the chase, more than the kill.

Another popular way to label lottery players mathematical losers is to compare the odds of winning with those of being in a fatal plane crash, or being struck by lightning, which are considered to be on the same order of magnitude. Here there's a double error. As well as not understanding the gaming nature of lottery play, these comparisons aren't even good probability, for several reasons.

First, the comparison is only ever made with the probability of winning the jackpot. Pretty well all lottery games have a range of prizes depending how many balls you match. Matching three balls is significantly more likely to occur than six. Okay the prize is a lot less, but the fact remains that with the UK Lotto, for instance, you can win not with the usual 1 in 14 million chance given for the jackpot, but more like 1 in 54 for all the possible ways of winning. That's a very different figure.

Secondly, the UK lottery has several games. If instead of playing the Lotto you play Thunderball there is a significantly better chance of winning. Okay, the main prize is only £500,000 - but 'only' applied to £500,000 is something of an oddity. Here the jackpot remains a painful 1 in 8 million away (though this beats Lotto), but the chances of winning plunge to the very accessible 1 in 13. if the naysayers are telling me that's my chance of being struck by lightning, someone up there doesn't like me.

And finally, in making the comparison with messy ways to die, our statistical misery guts are committing a classic statistical error - applying a statistic from a skewed population to everyone in the population. If you buy a lottery ticket, the stated statistics apply to your single ticket. But you can buy more than one lottery ticket and change those statistics. (With Thunderball, for instance, you can guarantee a win with 14 tickets.) Those struck by lightning or in a plane crash don't have an equivalent option. Even more interestingly, the statistics for these two hazards aren't those that apply to most of the population at large - and are way out for many individuals.

Take the chances of being in a plane crash. Clearly this depends on how frequently you fly. As some people fly weekly or even daily, their chances will push the averaged probability up significantly. If you only fly for a holiday once a year, your chances will be significantly lower. Even more so for me - I've flown once in the last 25 years, and have no intention of flying again. So don't tell me the chances of my being in a plane crash are the same as my winning the lottery.

A similar argument applies to being struck by lightning. People who spend a lot of time in at-risk environments are more likely to be struck than those who avoid exposed high places. So golfers and national park rangers, for instance, will have a significantly higher risk than a city dweller, pushing up the apparent risk.

I'm not denying that you are vanishingly unlikely to buy a ticket that will win the jackpot in a major lottery. But I do think those who use probability and statistics to sneer at lottery players, ought to think through their maths (and psychology) a little more.