So You've Been Publicly Shamed review 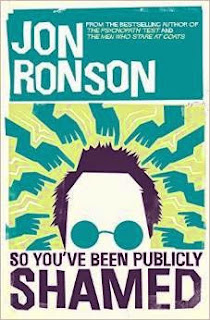 I have to admit straight away that I am a big fan of Jon Ronson's books. Combining the wide-eyed innocence of Louis Theroux with what seems significantly more of a conscience, Ronson wanders through a topic like America's psy-wars, terrorists or psychopaths in a way that manages to get some serious points across in a humorous and immensely readable way. Not to mention persuading a surprising range of people to be interviewed.

This meant that I rushed out and bought his latest as soon as I could... and I 'm just a touch disappointed. Arguably this is simply due to the huge expectations from previous books. I think the problem is that the topic here - public shaming, primarily via social media - is less dramatic and more appealing to a relatively small audience. Because, like it or not, the Twittersphere may think it is the world, but in reality it's only a tiny part of it.

So, for instance, I had only vaguely heard of what's probably the biggest topic in the book, the shaming of writer Jonah Lehrer, and I had never heard of two of the other main subjects, Justine Sacco and Lindsey Stone, each of whom was pilloried online for make a tasteless joke.

The good news is that, as usual with Ronson, the topics really made you think as well being entertaining. After all, Lehrer lost his career essentially for a slight embroidery of the truth. (I found it amusing that he and Tipping Point author Malcolm Gladwell were set up as if they typified popular science writers, where I would consider them essentially New York journalists who write self-help books with a marginal overlap with scientific subjects - and who are paid in a different universe to popular science authors.) The Lehrer story did me wonder why, for instance, his slight misquotes of Bob Dylan were considered such an earth shattering thing when, for instance, Bill Bryson quite happily admits to making his travel non-fiction a little more interesting than reality, and films like The Imitation Game, 'based on true events' play fast and loose with historical facts, and don't get this kind of destructive attack. (Incidentally, I reviewed Lehrer's book, entirely unaware of the apparent media storm, and was a bit dismissive of it, in part because I find anything about Bob Dylan as boring as I find Dylan himself.)

Similarly, it's hard to understand why such a fuss was made about the two women making the bad jokes online when jokes in worse taste are seen by a far bigger audience daily on TV. What's more, the pile-on and slag off reaction seemed entirely in opposition to the free speech ethos that most social media enthusiasts espouse. And it one case, the opprobrium was entirely due to Twitter followers not spotting the existence of irony (nothing new, I admit). I enjoy using Twitter, but I've never come across the kind of Troll-like reaction. I'd heard of it, but assumed it was reserved for celebrities who should know better, but these were ordinary people, mangled by ridiculous over-reaction from those with too much time on their hands.

So Ronson does definitely bring out something very interesting - and also covers a range of other aspects from the common misunderstanding of the nature and behaviour of crowds to the semi-official existence of shaming in the justice system. However, it still felt a lightweight subject for a book - almost like a good feature article instead. Even so, any Ronson fans like me will still find it well worthwhile, and it should be enforced reading for anyone inclined to pile in and abuse others on social media.

You can find SYBPS at Amazon.co.uk and Amazon.com
Using these links earns us commission at no cost to you