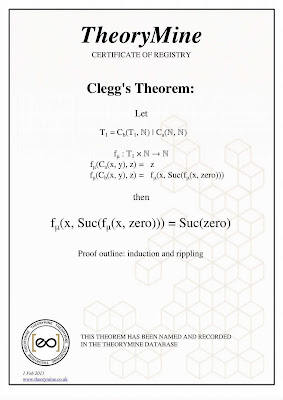 If I'm honest, there are probably not many children who, when asked what they want to be when they grow up, say 'A mathematician.' Similarly, while many kids want to be famous, have a hit record or play sport for their country, not too many, when asked, would admit that they would want to have a mathematical theorem named after them. But when you're a bit older, you have to admit it's kind of cool. After all, it didn't do Fermat or Pythagoras any harm.

Well, now you can have a theorem named after you - without doing the hard work. A spin-off of the University of Edinburgh,TheoryMine, produces new, unique mathematical theorems which for a small fee (£15) they will assign to you, allowing you to give it whatever name you like.

You might object that, since you didn't devise the theorem, your name can't be attached to it. Well, we don't know if Fermat did devise his 'last theorem' and Pythagoras definitely didn't originate his - and they haven't done too badly. The fact is, the originator of the theorem can do what they like with it, including assigning it to you.

You also might think that this is just another version of the Star Registry idea. You know the one. You pay a fee and the Global Star Registry names a star after you or your loved one. It certainly has some similiarities, but I would argue it is actually much better as a concept.

The trouble with the Star Registry business is, first of all it's not official. It's just a company that allocates these names, but they have no standing. Astronomers will never call that star 'Enid Snoopbottom's star.' And secondly the star was already there, so all they are selling, even were it legit, is a name.

With the theorems, something new has been created for you. This is a genuine mathematical theorem that has not been previously discovered. (If they make a mistake and someone else has priority, they will give you two new theorems in return.) And this is, for real, the actual discovery of the theorem, so your name is genuine. Now it's quite likely that, should another mathematician later make use of this theorem, they won't know it's yours so won't refer to it as 'Enid Snoopbottom's theorem'. But you will have priority - it really does belong to you.

So there you have it. The theorem above is a genuine mathematical theorem by the name of Clegg's Theorem. (What does it mean? I haven't a clue. That's not the point.) And it's mine, I tell you, all mine!