February 22, 2011
On Saturday I received an envelope in the post. Of itself this isn't particularly remarkable. I often do. If it had been, say, a wallaby, I would have been surprised, but envelopes are pretty run of the mill. I opened it up. It was a batch of royalty statements, forwarded by my agent. Again, not particularly surprising, although he tends to scan and email them these days. But there was something a little odd. They were all statements from 2009. 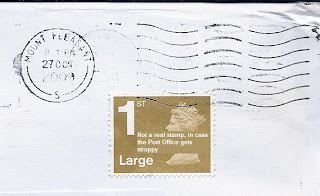 Okay, perhaps he'd been having a clear out. It happens. You have one of those piles of relatively unimportant paper that you don't get round to, things get buried at the bottom and you discover them a couple of years later. At this point I took a look at the postmark. For your entertainment and amazement I have included it here. Yes, it was posted on 27 October 2009 and arrived on 19 February 2011. Even by the Post Office's standards, this is pretty amazing.

So what happened to it? In speculation it's possible to have a considerable amount of fun. Perhaps it has travelled around the world, getting slipped into the wrong bag on numerous occasions. Perhaps it has been to places I can never hope to visit. Alternatively, perhaps it slipped down the back of the sorting machine at Mount Pleasant (a misleading name if ever there were one) and has been sitting there ever since, until an official Post Office feather duster happened to winkle it out, when it got thrown into a delivery sack.

What slightly disappoints me is that there is no attempt to apologize. You'd think wherever it was found someone would have glanced at the postmark, noticed how late it was and might have scribbled on a brief acceptance of remorse. But no. Not a word. Anyone would think they didn't care.