The stuff of champions 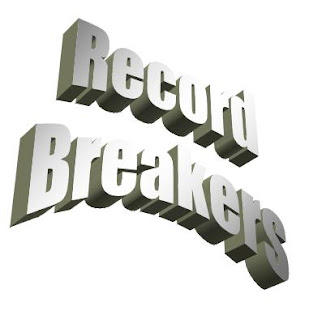 There's something rather special about being the best at the world in something. It really doesn't matter what it is. I was once, briefly, the world champion at speed reciting Hamlet's soliloquy. No, really. A friend and I went through the Guiness Book of Records the way you do, looking for likely records to be able to break, and this seemed feasible. We managed to record my young voice zipping through the soliloquy faster than the time in the book. The next day that popular TV show of the period Record Breakers came on. Guess what. Someone broke my record, before we could even send the tape in. Bugger.

Of course, athletics records are much more serious than speed reciting. (Why?) But sometimes the sports people get carried away with themselves. They suffer from a classic problem of the non-technical faced with data. They want to go into meaningless detail, and as a result, they produce records that don't hold up to scrutiny.

Take the 5,000 metres race. Apparently the IAF (International Athletic Federation) rules specify very precisely how long a running track should be, but inevitably they allow a margin for error. If you translate this error into typical top end running time for 5,000 metres it amounts to around a half second variation in the time it would take a runner to get around the 5,000 metres. So to declare anyone a new world champion based on breaking the record by less than half a second is entirely meaningless. Yet in 1985, someone was declared the new champion after breaking the record by 0.01 seconds.

This shows remarkable ignorance of the way numbers work on the part of the athletics people. It also makes me think how odd it is that we consider some world records more important than others. The athletic disciplines are ludicrously arbitrary. Why is running 5,000 metres something of world importance, but being the fastest person ever to hop round Leicester Square isn't? Both are feats of extreme physical exertion (I'm not sure why this matters, but there you go). Both make someone the best in the world. It's just so arbitrary.

I don't expect the powers-that-be to go for a hopping race any time soon, but they could, at least, recognize the limitations of their measurements and keep world records to realistic limits of accuracy.

Information on 5,000 metre measurements from Quantify! by Goran Grimvall