The pain of deadlines 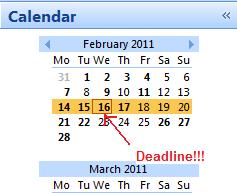 Deadlines are a fact of life when it comes to writing books. Of course not everyone sticks to them. Douglas Adams famously said: 'I love deadlines. I love the whooshing sound they make as they fly by.' But for most authors, particularly if it's your first book, the deadline can be a pretty scary thing. This isn't helped by contracts that contain dark threats along the lines of 'If you don't submit your manuscript by the agreed date, you will have to pay back your advance and sacrifice your first born.'

The good news is that most publishers will cut you a little slack if necessary. I didn't really understand this to start with. My first professional writing was for weekly magazines, and with them, the deadline was 5pm on day X, and that was it. Then on one book I misread the deadline as the last day of the month, where actually it was the first. When I was about two weeks late, the editor mildly asked if I would be ready soon. It wasn't a problem. In fact I've talked to academic publishers who reckon most academics think that if they get a book in within 3 months of a deadline, they've hit it.

That's excessive, but as long as you give them some warning, editors are usually happy to be a little flexible. For me, though, that magazine heritage is still there, and it's very rare that I don't deliver on the specified date. (In fact apart from that accidental overrun, I think I've only once delivered 2 weeks late by agreement.)

You might think that the pain of a deadline goes away once you've sent off your manuscript, but in some ways the worst bit is still to come. Now there's a pause. You know that eventually the editor is going to come back and say:
... but you don't know which. Being a writer, you are naturally paranoid, and despite any experience to the contrary tend towards the third option. So you are on tenterhooks. And the editor doesn't get back to you. Days roll by. You might think this is because the editor is spending a lot of time on your book, but I've had editors admit a month after submission 'I haven't got round to it yet, I have another project to finish.' Sigh.

I realize an editor isn't just working on my book. But I do think there could be a little more communication in this period. If (s)he knows a few days before deadline that (s)he isn't going to pick up your manuscript in the next month, it would be nice to be given some breathing space. If once (s)he's got it there is a delay that isn't caused by trying to work out how to salvage your book from disaster, it would be great just to get a little 'Everything's fine, I should get round to looking at it next week.' But on the whole there is very little communication.

It's not true of every editor - some really keep you in the loop, and/or are lightning fast with an initial assessment - but these are relatively rare. So perhaps the worst thing about a deadline is that you hit it not so much with a bang as a whimper. The big day arrives... and nothing happens for a month. Hey ho. Don't you just love deadlines?