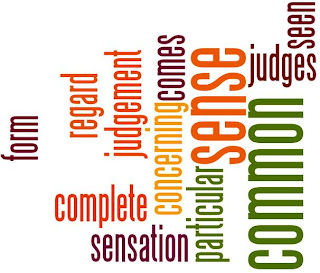 We hear a lot about common sense these days. It's hard not to imagine a politician like Eric Pickles, for instance, failing to stress the importance of common sense. (For some reason, it goes with the voice.) So what is common sense? Before we answer that, consider a little problem.

You don't even need to involve numbers, just take the example to the extreme. Imagine the wind was so strong it reduced the plane to a crawling speed - it is going to take days. But adding that wind speed to the plane's won't quite double it. If the wind were 500 mph or more, the plane would never make it on the outbound journey.

So what is common sense, and why does it fail us? Originally common sense was thought to be a literal sixth sense that combined the inputs of the other senses. Thirteenth century proto-scientist roger Bacon tells us that the common sense ‘judges concerning each particular sensation. For the judgement is not complete in regard to what is seen before the form comes to the common sense…’ But it has come to mean the obvious, the clear solution that comes to mind without thinking about it. And, when you do think about it, there is no good reason for this to be correct.

The most common example of common sense failure tends to be in situations where probability and randomness are in charge. Our brains are so good at spotting patterns - it's how we relate to the world around us - that we imagine them where they don't exist. The failure of common sense in the plane example is also a matter of imposing a pattern, but it's rather more subtly done.

I think it comes down to a sense of balance. Balance is a sort of pattern in its own right. We are adding a wind speed to one journey and subtracting it from another journey. This seems to balance, so we expect the effect to be the same. However the thing that is the same is the change in speeds, while we are looking for a change in time. There is no reason to suppose things working in totally different units will necessarily balance - there is another contributory factor we are not considering.

Common sense is handy in many circumstances, but as soon as we start combining common sense and anything involving pattern or number we need to take a step back and give common sense a rest.