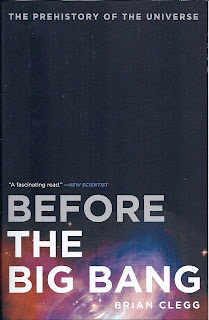 I am delighted to announce that my book Before the Big Bang is now available in paperback. (To be more precise it is available in paperback in the US - it doesn't reach the UK until next month, so presumably a crate is bobbing its way across the Atlantic as we speak, but you can pre-order it on Amazon.)

I have to confess that this is one of my favourites of my books to date, and I've been really pleased with the way it has sold in hardback, so I hope the paperback version will take off and keep up with its older sister The God Effect.

It's interesting that for the cover (which has that rather nice, silky feel of many modern US paperbacks) they have chosen an image that was rejected for the hardback. I think it was a good move, because the cover on the hardback was a little dark. Okay, this is dark as well, but it does have some colour in it.

This has been a problem with my books for St Martin's Press - I suppose because they often involve space or quantum physics (?) or some such, it's felt that a black background gives the right impression, but the trouble is that the cover doesn't grab your attention if it's face forward - from a distance it's just blackness. (The same thing was going to happen with my next title, about which more later in the year, but I think I've persuaded them to go for a brighter cover.)

One thing about the paperback that really excited me, but might seem strangely 'So what?' if you aren't an author is that my name is above the title on the spine. The reason this feels exciting is that having the name first, rather than leading with the title, seems to suggest 'Hey, here's another book by that excellent author, Brian Clegg,' and you don't need to know any more.

Whether or not this was what St Martin's Press had in mind, it makes me feel rather chuffed.