Settling down with a good byook 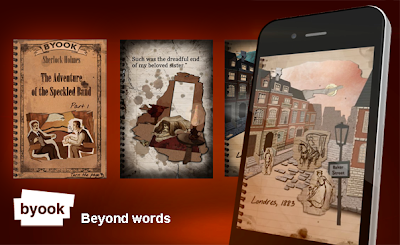 'What do you make of this, Watson?'
I caught the object Holmes languidly tossed in my direction from the ottoman. 'It's a slipper, Holmes.'
The great man sighed. 'Inside the slipper.'
I carefully opened the persian slipper, within which Holmes habitually kept his tobacco. But instead a most remarkable device befell my gaze. An engine of outstanding craftsmanship, like a piece of polished jet that glowed alight with the richest colours. 'It seems to be a computing engine, Holmes.'
'And much more beside. It is an iPhone, Watson. But I refer to the "app" that resides in its capacious memory. Do you recall the adventure of the Speckled Band?'

I can't keep this up. What I'm setting out to do is review a new iPhone app. It's the classic Conan Doyle short story, The Speckled Band, but this isn't just a common or garden ebook. It's a new format, called by the makers a byook. (We'll come back to that.) 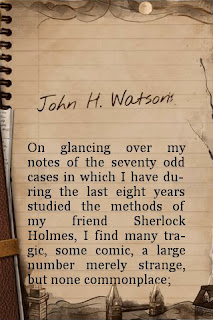 The idea here is a very good one. Ebooks are often, if anything, a step back from from a traditional paper book. Because of the need to change pagination to fit text size and page orientation, they have very little of the elegant formatting of a good book. In fact, ebooks are often rather a mess. But the byook format takes the text, and adds to it, using the multimedia capabilities of the iPhone.

Yes, you are reading an ebook - this isn't a computer game. But there are animated illustrations, sound effects and more. It sounds brilliant. Back in the relatively early days of computer gaming, when graphics really started taking off, I was a great fan of a game called The Seventh Guest. It was spooky, atmospheric and intriguing. The byook format has the potential to apply the same sort of atmospherics to the process of reading an ebook.

There are, however, a few issues with the implementation in this first ever byook. I suppose I have to start with that name. The makers do not have English as a first language and, I'm sorry, 'byook' just doesn't work in English. It syucks. Then there's the chosen title. I have nothing against using a Conan Doyle story. And I think byooks will work best with atmospheric titles, so in that sense it's a good choice. But what we have here is not a novel. The Speckled Band is just one of the short stories in The Adventures of Sherlock Holmes, and this byook isn't even the whole short story, only covering the first half of it. They're charging $1.99 for half a short story. Now bearing in mind the Sherlock Holmes stories are out of copyright, and you can download the whole book as an ebook for free, this is quite steep. 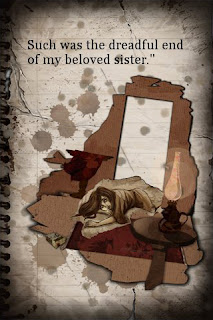 Is the experience worth the difference? I'm not sure. It is very clever. A lot of the pages are animated just with a change of page colour and some marginalia sketched in around the outside as if Watson is doodling as he takes notes, but they also accompanied by music and sound effects. These vary from the spot-on, like a gently ticking clock to the excessive, where a fire in the hearth sounds like the whole building is burning down. The effects come into their own on occasional pages where there is more animation, and the sillhouette of Holmes appears, blood spatters across the page or, perhaps most effectively, lightning flashes across the screen with the phone vibrating in time to the thunder. There are also neat effects where the text shakes, or blurs before settling down.

So - a good idea? Definitely. Atmospheric? A resounding yes. But it costs too much for too little content. (It was also too big at around 50 Mb - I hope most of that was the environment and a new byook title wouldn't add a similar amount, as that's an awful lot of storage for half a short story.) Without doubt it added atmosphere to the reading process. If I had a gripe there, it's that I'm a fast reader, and I found myself having to wait on each page (effectively just a paragraph or two) for the effects to do their bit before I turned on. This meant I tended to lose the flow of the story.

Am I dismissing byooks (please change the name) out of hand? No, not at all. With a suitably atmospheric story they are great fun and I hope to see more of them. But we need more content in a single title before they can really take off. You can buy The Speckled Band Part 1 byook at the iTunes Store.