Taking out a contract 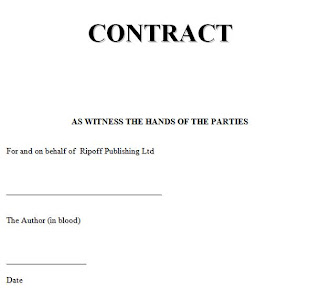 Imagine you are a new writer and you are lucky enough to be taken on by a publisher. Before long you will be faced with a contract. It's natural to want to get it signed as quickly as possible before they realize they've made a mistake and change their mind. But hold on. You need to read it and make sure you are happy with it. This won't upset the publisher - they expect you to check it.

Now it might be you have an agent. Well, good for you. But even so I would read through that contract. Because some agents are better at making deals than sorting out the fine legal detail, and in the end, it's your neck that's on the line. It might look boring and/or complicated, but you need to read every word. Just take it slowly and most of it is quite comprehensible.

If you are in the UK and you already have an agent or a publishing contract I'd recommend making use of the Society of Authors contract checking service (unfortunately you need to have an agency or a contract before you can join), but even if you do this it's worth checking through yourself.

I can't identify every nasty that could be in there, but here are a few things to look out for:
If in doubt, ask. Once you sign up there's no going back.

Updated to correct requirements to join SoA - thanks, Emma